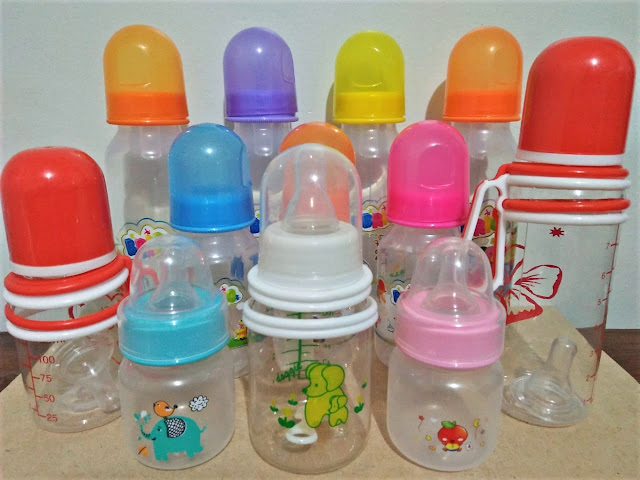 Civil society groups Arugaan and the EcoWaste Coalition scored the sale of plastic baby feeding bottles lacking market authorization from health authorities as such items may contain Bisphenol A (BPA) and pose health risks to infants.
The groups had earlier purchased a dozen of cheap baby feeding bottles from various “Presyong Divisoria” stores in Makati, Mandaluyong and Manila Cities.  The items bought are inadequately labeled and are not duly authorized by the Food and Drug Administration (FDA).
Republic Act 9711, or the FDA Act of 2009, prohibits the manufacture, importation, distribution and sale of health products, including childcare articles like feeding bottles “without the proper authorization” from the agency.
“Baby feeding bottles that have not undergone the FDA’s notification process may not be compliant to quality and safety requirements.  For instance, unauthorized products may contain BPA, an endocrine disrupting chemical, banned in baby feeding bottles and sippy cups,” said Thony Dizon, Chemical Safety Campaigner, EcoWaste Coalition.
FDA Circular 2019-004 issued on August 9, 2019  prohibits BPA in baby feeding bottles and sippy cups as child care articles “to better protect the health of children and better reduce exposure” to BPA.
As stated in the circular that Arugaan and the EcoWaste Coalition campaigned for, “relevant epidemiological studies have shown that BPA affects the development of the nervous, immune and reproductive systems and is considered as endocrine disruptors which can alter the hormonal system of the human body.”
According to a guide published by the Endocrine Society and the International Pollutants Elimination Network, “most people are exposed by consuming food and beverages into which BPA has leached from the container.”  The leaching is said to be enhanced by environmental factors such as heat, sunlight, and acidity.
“Several agencies including the World Health Organization and the National Toxicology Program have expressed concern regarding the impact of BPA on fetal brain development and behavior. Evidence from numerous animal models has shown that developmental BPA exposure elevates anxiety, aggression, and other behavioral effects, which have now been reported in children,” the guide noted.
To reduce exposure to BPA in infant feeding bottles, the groups urged the public to avoid unauthorized plastic baby bottles, those that are not labeled "BPA-free" and  those marked with number 7 or the letters "PC" (for polycarbonate) as they may contain BPA.
Arugaan and the EcoWaste Coalition further highlighted that breastfeeding, instead of infant formula feeding, is another practical way of avoiding exposure to BPA, noting that exclusive breastfeeding for six months and continued breastfeeding up to two years and beyond, with nutritionally sufficient complementary solid foods, is best for the health of babies and their mothers.
The groups added that breastfeeding is zero waste practice at its best requiring no plastic, paper or tin packaging, and no plastic bottles and teats, too.
“Unlike infant formula, breast milk is waste-free, wasting no raw materials to produce and generating no waste in the process,” the groups pointed out.