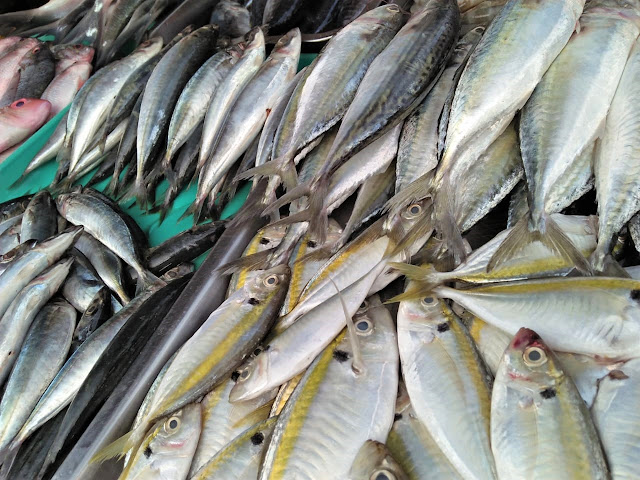 1 May 2021, Quezon City.  As the Month of the Ocean is observed this May, environmental health groups EcoWaste Coalition and Oceana Philippines urged the government and other sectors to give close attention to the adverse impact of chemical pollution to the country’s dwindling fishery production.

The groups' clarion call for action to protect fish and other marine organisms from various pollutants followed the release of a new report detailing how chemical pollution is harmfully impacting the aquatic food chain, noting that “progress will require fundamental changes in the way we produce, use and manage chemicals and their associated wastes.”

Published by the International Pollutants Elimination (IPEN) and the National Toxics Network (NTN) of , the report Aquatic Pollutants in Oceans and Fisheries documents the science and numerous ways in which chemicals compromise reproduction, development, and immune systems among aquatic and marine organisms.

“As a fishing dependent and archipelagic nation, it is incumbent on us to insist and support global and local action that will prevent and control chemical and waste pollution from all sources, which is making the ocean ecosystems sick and incapable of meeting the huge demand for fish,” said Aileen Lucero, National Coordinator of the EcoWaste Coalition (a participating organization of IPEN), who also emphasized “we need healthy oceans and fisheries to ensure our people’s food security and nutrition.”

Atty. Gloria Estenzo-Ramos, Vice-President of Oceana , said: “Decision-makers from all branches of government including the judiciary must realize the critical juncture we are in and exercise the urgent political will to ensure a safe and healthy environment for all. Our laws are not lacking in addressing impacts of chemical including plastics pollution that destroys the health of our people and our oceans, but, there still is much foot-dragging  in performing the mandates of their office. We hope this publication can be among the wake- up calls for all to prioritize health and act in solidarity now as our enduring gift to our present and future generations.”
“Pollutants including industrial chemicals, pesticides, pharmaceuticals, heavy metals, plastics and microplastics have deleterious impacts to aquatic ecosystems at all trophic levels from plankton to whales,” the report said, stressing that “overfishing is not the sole cause of fishery declines.”

Report authors warned that the impacts scientists have identified are only likely to grow in the coming years and will be exacerbated by a changing climate, noting that “the global seafood industry, and the livelihoods and survival of millions of artisanal fishers and communities who depend on seafood, are at a crossroads.”

“Many people think fish declines are just the result of overfishing. In fact, the entire aquatic food web has been seriously compromised, with fewer and fewer fish at the top, losses of invertebrates in the sediments and water column, less healthy marine algae, coral, and other habitats, as well as a proliferation of bacteria and toxic algal blooms. Chemical pollution, along with climate change, itself a pollution consequence, are the chief reasons for these losses,” said Dr. Matt Landos, report author and Director of Future Fisheries Veterinary Services in .

Dr. Mariann Lloyd-Smith, IPEN Senior Advisor and report co-author, stated: “The production and use of chemicals have grown exponentially over the past couple of decades. Many chemicals persist in the environment, making environments more toxic over time. If we do not address this problem, we will face permanent damage to the marine and aquatic environments that have nourished humans and every other life form since the beginning of time.”

“We are at the precipice of disaster, but we do have an opportunity for recovery. The out-of-control expansion of the polluters – the oil, gas, plastics, and chemical sectors – needs to be reined in,” said Jo Immig, NTN National Coordinator and report co-author. “Governments around the world must urgently acknowledge the environmental, economic, and public health degradation caused by chemical pollution and act on the scientific evidence to develop policy and lead their communities to totally re-think how chemicals are used.”

Addressing ocean pollution and its impacts on fisheries will need substantial shifts in industries, economies, and governance, including the cessation of destructive industries like deep-sea mining and stopping the devastating practice of using our waterways as waste dumps.

Regenerative approaches to agriculture and aquaculture are urgently required to help lower carbon emissions, stop further pollution, and begin the restoration process. Transitioning away from fossil fuel extraction and use remains an urgent priority, as well as holding chemical producers accountable and responsible under the polluter pays principle.

Additional information:
1.  Presidential Proclamation No. 57, series of 1999, declares the month of May of every year as the Month of the Ocean to highlight the importance and significance of conservation, protection, and sustainable management of Philippine coastal and marine resources.
2.  The report Aquatic Pollutants in Oceans and Fisheries has identified the following as key areas of concern:
Email Post