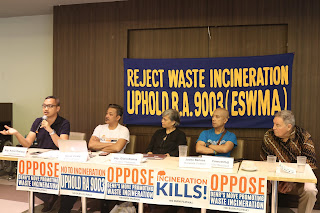 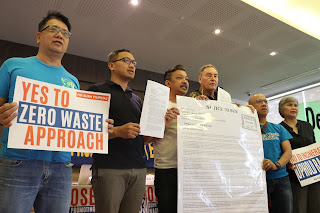 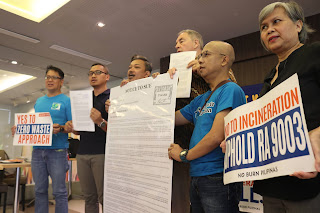 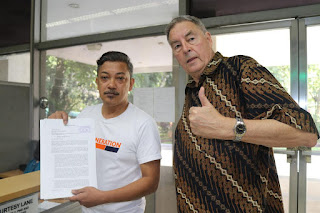 As the Zero Waste Month draws to a close, environmental defense lawyers and zero waste activists pressed the authorities to faithfully enforce the provisions of the country’s waste and pollution prevention laws against the incineration of garbage.

To compel the Department of Environment and Natural Resources (DENR) into upholding the ban on incineration under Republic Act 8749 (the Clean Air Act) and reiterated in Republic Act 9003 (the Ecological Solid Waste Management Act), groups belonging to the No Burn Pilipinas (NBP) today filed a “notice to sue” to rescind DAO 2019-21.

Signed by DENR Secretary Roy Cimatu, DAO 2019-21 sets the guidelines for the establishment and operation of waste-to-energy (WtE) facilities, which environmentalists have dismissed as “a euphemism for incineration or burning of solid waste.”

At a press conference convened by NBP, lawyers and activists took turns in criticizing the WtE order and the gross inaction in phasing out non-environmentally acceptable products and packaging (NEAP) materials such as the ubiquitous single-use plastics (SUPs).

“By issuing the WtE Guidelines, the DENR is reneging on its constitutional and legal mandate to uphold the right of the people to a balanced and healthful ecology being the primary agency tasked to enforce environmental laws, not violate them. In the last two decades, DENR has failed to ensure the full implementation of RA 9003 and RA 8749,” said Atty. Aaron Pedrosa, lead counsel of the NBP.

“By extending a blanket clearance for WtE projects through DAO 2019-21, it places itself above the law in violation of the prevailing ban on incineration. We are serving notice to DENR: rescind DAO 2019-21 now or be sued,” he emphasized.

"The DENR continues to defy the laws that mandate them to protect Filipinos from environmental harm and danger by proposing and allowing waste incineration, a quick-fix false solution to our waste problem. DAO 2010-06 and recently DAO 2019-21 are just concrete examples of how the agency circumvents RA 9003, RA 8749 and other laws that would ensure our constitutional rights to a balanced and healthful ecology,” added Glenn Ymata, Senior Campaign Manager of NBP.

“It is high time that the government exercise its powers and duties to untrash our oceans from millions of sachets, plastic bottles, straws and cutlery, and other SUPs thrown into it every second. How? By stopping and reducing its production at source. By including SUP in the list of non-environmentally sound materials - and releasing it, the National Solid Waste Management Commission (NSWMC), mandated to do so within one year from the effectivity of RA 9003 eighteen years ago, we would have adequately reduced and stopped the source of plastic pollution ravaging us and our environment,” stated Atty. Gloria Estenzo-Ramos, Vice President, Oceana Philippines

“This policy issuance would have already lifted the financial woes and physical burden of finding a landfill and the dire environmental justice issues and health consequences that are now lodged with the barangays, municipalities and cities, and provinces to face, who are overwhelmed by the sheer volume of single-use plastics issues they are compelled to find solutions to,” she pointed out.

“Preventing and reducing the country’s escalating garbage problem is at the core of implementing RA 9003.  For 20 years now, this continues to be a major struggle for the lead coordinating and implementing agencies – NSWMC and DENR,” noted Jove Benosa, Zero Waste Campaigner, EcoWaste Coalition.

To reduce the volume of trash that ends up being littered, dumped and burned in disposal sites, or gets discarded into the oceans, Benosa called on all households, barangays and local government units to actively enforce the segregation of discards at source, recycling, composting and other requirements of RA 9003, including the establishment of community-based materials recovery facilities.

“We also call the attention of industries and businesses involved in the manufacture and sale of consumer goods to take responsibility in reducing the production and usage of wasteful and harmful SUPs clogging drains, river ways and the oceans," he added.

For his part, visiting Zero Waste expert Dr. Paul Connett explained that “energy generation and the promise of less climate impact don’t change the fact that when you burn resources they have to be replaced, which wastes more energy and creates more greenhouse gases.”

“While landfills bury the evidence (of wastefulness), incinerators burn them.  This is true of incinerators no matter what fancy name is used to describe them – WtE, thermal valorization, gasification, pyrolysis or plasma arc facilities,” said Connett, a staunch anti-incineration advocate and author of the book “The Zero Waste Solution: Untrashing the Planet One Community at a Time.”