Groups Hail Impending Re-Export of South Korean Waste as Victory for Environmental Justice (Over 5,000 tons of illegal waste imports from South Korea to be shipped back on January 19 and February 9) 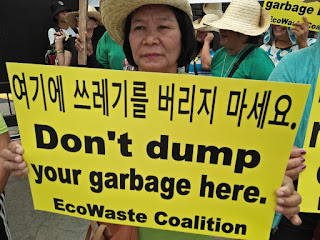 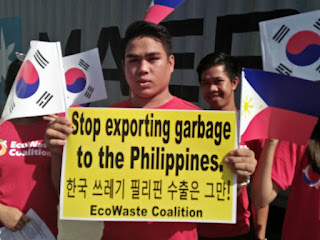 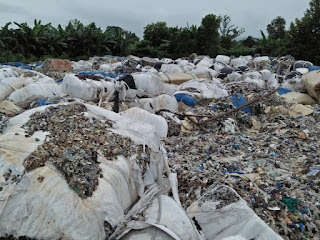 The impending re-exportation of illegal waste shipments from South Korea, described by the authorities as “misdeclared, heterogenous and injurious to public health,” has been welcomed by green groups who say it will help in rectifying the environmental injustice committed against Mindanao and the entire Filipino nation.

Through a text message received by the EcoWaste Coalition from Port Collector John Simon of the Bureau of Customs- Region 10, the authorities announced that 60 container vans of illegal waste imports by Verde Soko Philippines Industrial Corporation will be returned to South Korea on January 19 and the rest on February 9 with vessels from Maersk International Shipping Lines as the official carrier.

“The long wait will soon be over.  In line with President Rodrigo Duterte’s directive banning waste imports and in cooperation with the South Korean government, we are shipping back the remaining wastes to their origin on January 19 and February 9.  The re-exportation of the misdeclared plastic wastes to where they come from should send a clear signal to all parties that our beloved country is not a global dump and that waste traffickers will be held accountable to the fullest extent of the law,” Simon said.

"This is good news for the people of Mindanao as we assert our unwillingness to be an entry point of hazardous waste from overseas.  The re-shipment of the South Korean waste to its source is a historic win for our people and the environment,” said Chinkie Peliño-Golle, Executive Director, IDIS, adding that “this is only a partial victory as the culprits behind this toxic mess have yet to account for their misdeeds."

“The complete removal of the remaining South Korean waste in Tagoloan, Misamis Oriental, the clean-up of the storage site and the prosecution of the offenders will help in correcting the grave environmental injustice inflicted on Mindanaoans in particular and Filipino people in general,” said Aileen Lucero, National Coordinator, EcoWaste Coalition.

“We commend Port Collector Simon and his team, as well as other customs, environmental and local government officials in the region, for taking a brave and solid position against foreign waste dumping and for finding ways to overcome logistical challenges, especially with the complicated repacking of the bulk waste,” she said.

It will be recalled that illegal waste shipments from South Korea, falsely declared as “plastic synthetic flakes,” with a total combined weight of 6,500 tons arrived at the Mindanao International Container Terminal (MICT) in July and October 2018.

BOC-10 issued three warrants of seizure and detention against the illegal waste cargoes followed by a re-exportation order citing violations of DENR Administrative Order 2013-22 and the Customs Modernization and Tariff Act.

Following the agreement reached by the governments of the Philippines and South Korea in December 2018, some 1,400 tons of illegal waste shipments were sent back to South Korea on January 13, 2019, which was witnessed by representatives from the EcoWaste Coalition, Greenpeace, IDIS and other civil society groups from Davao City.

The repatriation of the remaining wastes from South Korean was delayed due to financial and logistical issues related to their re-bagging and transfer from the PHIVIDEC site to the MICT.

Meanwhile, the EcoWaste Coalition pressed the national government to speed up its ratification of the Basel Ban Amendment, which entered into force on December 5 last year, and to adopt a full ban on foreign waste importation to protect the country from illegal waste traffic.

The Basel Ban Amendment prohibits the export of hazardous wastes for all reasons, including recycling, from rich countries belonging to the Organization of Economic Cooperation and Development (OECD), European Union (EU) and Liechtenstein to developing countries like the Philippines.

“Ratifying the Basel Ban Amendment and further prohibiting the export of all wastes to the Philippines will be our best legal protection against waste trafficking," the EcoWaste Coalition insisted.

This is a really interesting topic. A college course online can aid to get into this even better.