Toxic Candles Flagged by EcoWaste Coalition Ahead of Undas 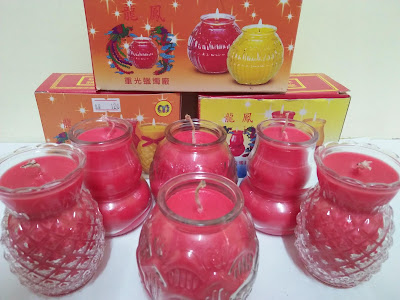 The EcoWaste Coalition reminded the public not to buy and use candles with health-damaging lead-cored wicks as millions are expected to pay their respects to the dead in cemeteries and columbaria this week.

The waste and pollution watchdog group issued the reminder after confirming that such candles, which the US federal government banned in 2003 and which the Food and Drug Administration (FDA) of the Philippines advised the public against buying and using in 2016, are still being sold in the market, particularly in Binondo, Manila.

In test buys conducted on October 27, the group managed to buy candles with lead-cored wicks from Taiwan from a shop in Ongpin St. that sells Chinese prayer articles.  The red-colored candles, sold from P120 up per pair depending on the size, are available in clear glass containers shaped like gourd, lotus and pineapple.

As per X-Ray Fluorescence (XRF) screening, the candle wicks have lead content reaching up to 8,668 parts per million (ppm).

“We advise the public not to light candles with lead-cored wicks as this could pose a lead poisoning risk, especially to young children who may inhale the lead that vaporizes into the air as the candle burns,” said Thony Dizon, Chemical Safety Campaigner, EcoWaste Coalition.

“While the ingestion of lead-containing dust, soil and paint chips is the principal route of childhood lead exposure, it is essential that all other preventable sources of lead poisoning in children are averted,” he added.

As stated in FDA Advisory 2016-146, which was issued at the insistence of the EcoWaste Coalition, emissions from candles with lead-cored wicks “can result in increased blood lead levels in unborn babies, babies and young children.”

For children’s health, the group advised the public to shun lead-emitting imported candles and to opt for locally-made candles with braided or twisted cotton as wicks.

Aside from mass-produced candles on store shelves, there are also candles sold “for a cause” that consumers can choose from such as those made by released prisoners and their families belonging to the Binhi ng Pag-asa Community Inc., the group said.

To stop the importation, distribution and sale of candles with lead-cored wicks, the EcoWaste Coalition has recommended a follow-up FDA advisory that will explicitly prohibit the trade of such toxic candles.