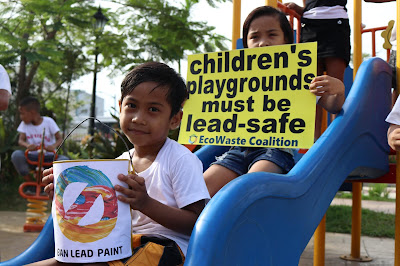 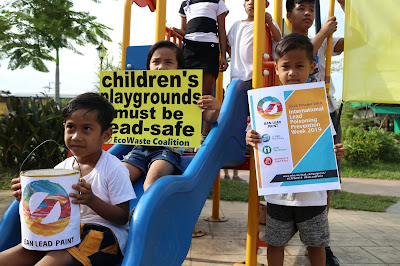 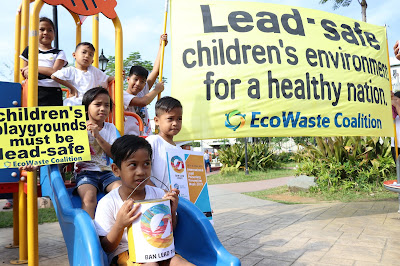 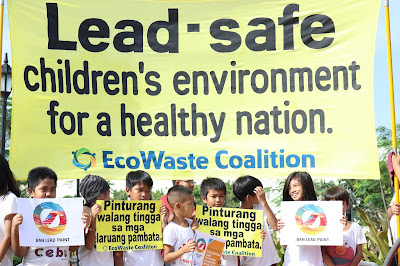 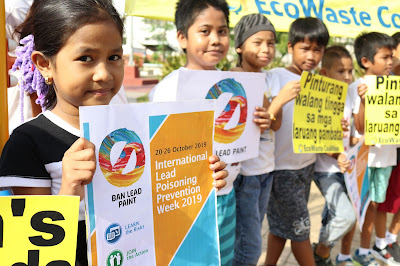 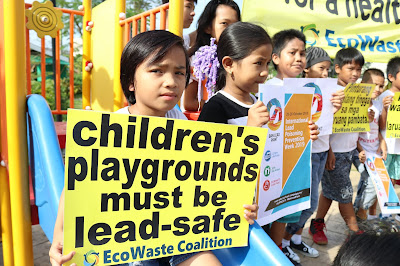 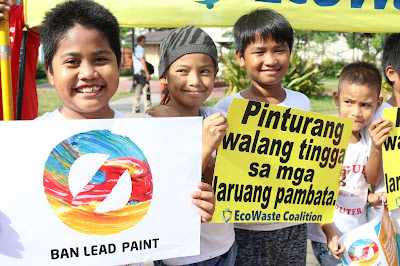 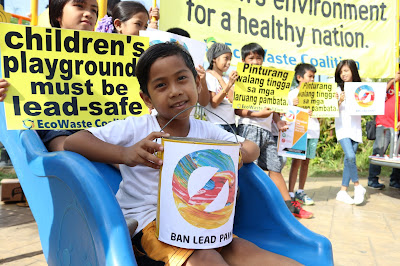 High levels of lead, a potent neurotoxin, have been discovered on public playground equipment in several cities across the country. The painted play equipment containing dangerous amounts of lead pose a serious lead poisoning risk for young children, rousing environmental health advocates to call for the effective enforcement of the ban on lead in all paints, especially for applications that can expose children to lead contamination.

The EcoWaste Coalition sounded the alarm over lead painted play equipment as the UN-backed International Lead Poisoning Prevention Week of Action is observed from October 20-26 with focus on eliminating lead paint.  To mark the occasion, the group assembled today at the Caloocan City People’s Park to press for a lead-safe play environment for all Filipino children.

According to the report “Lead in Playground Equipment in the Philippines,” 50 out of  55 play equipment analyzed by the group had total lead concentrations above 90 parts per million (ppm), the limit set by DENR A.O. 2013-24 and reiterated by EMB M.C. 2016-010.  In addition, 42 of such lead-coated playground equipment had dangerously high lead levels above 10,000 ppm.  Multi-layered lead painted surfaces were found to be most hazardous with lead levels reaching up to 662,863 ppm.

“The high levels of lead detected on the paint of outdoor playground equipment are very worrisome and unacceptable.  The paint will deteriorate with repeated use and exposure to sun and rain.  This will cause the paint to peel and get into the dust and soil, which can be ingested by children through common hand-to-mouth behavior,” said Thony Dizon, Chemical Safety Campaigner, EcoWaste Coalition.

“Lead-containing dust and soil is the major pathway by which lead in paint contributes to children’s lead exposure, which can adversely affect their health throughout their lives.  The findings of the EcoWaste Coalition should trigger a review as to how the country’s lead paint regulations are being enforced and how these can be strengthened,” said  Jeiel Guarino, Global Lead Paint Elimination Campaigner, IPEN.

The said report, prepared in collaboration with IPEN, a global network of public interest NGOs for a toxics-free future, including the EcoWaste Coalition, highlights the importance of urgent actions to enforce the ban on lead paint for all purposes, especially for decorations and coatings on products that can contaminate children’s environment.

The study was undertaken to raise public awareness about the presence of lead paint in children’s playgrounds and persuade the authorities to take decisive actions, including the implementation of lead paint regulations and the promotion of safety measures to reduce lead dust hazards when old lead painted play equipment are renovated, repainted or replaced.

Both the EcoWaste Coalition and IPEN are pushing for the effective enforcement of lead paint regulations, including the mandatory procurement and use of lead-safe paints, to ensure that children and other vulnerable groups such as women and workers are protected from lead exposure.

According to the World Health Organization (WHO), “Lead exposure affects human health, especially for children. There is no known level of lead exposure without harmful effects. Even low levels of lead exposure may cause lifelong health problems.”

“Lead is especially dangerous to children’s developing brains, and can cause reduced intelligence quotient (IQ) and attention span, impaired learning ability, and increased risk of behavioral problems. These health impacts also have significant economic costs to countries,” the WHO said.

As stated by Dr. Maria Neira, Director of WHO’s Department of Public Health, Environmental and Social Determinants of Health,“Lead paint represents one of the most widespread sources of lead exposure to infants and children. Yet lead paint still lurks in homes, in schools and on toys.  Banning lead paint now can prevent future exposures. This is a very good investment in your health, and in the health of your children.”

The WHO has warned that “childhood lead exposure is estimated to contribute to about 600,000 new cases of children with intellectual disabilities every year.”