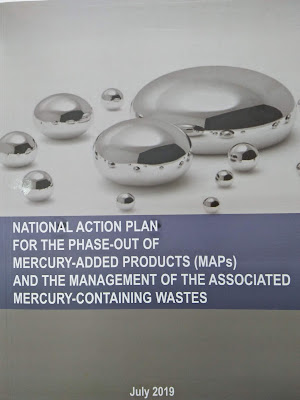 The waste and pollution watchdog group EcoWaste Coalition has lauded the government-led collaborative process  resulting to the adoption of a national action plan (NAP) that will help the country in meeting the global phase-out target by 2020 for specific mercury-added products (MAPs).

“While the Philippines has yet to ratify the Minamata Convention on Mercury, concrete projects and activities are already being implemented  to protect public health and the environment from the adverse impacts of mercury pollution,” noted Thony Dizon, Chemical Safety Campaigner, EcoWaste Coalition.

“The meaningful efforts of the government, supported by UN agencies and civil society organizations, should encourage President Rodrigo Duterte into ratifying the convention without further ado and subsequently obtaining Senate  concurrence, hopefully before the third Conference of the Parties this coming November,” he said.

Dizon specifically cited the project promoting the ratification and implementation of the mercury treaty funded by the Swiss government and jointly carried out by the Department of Environment and Natural Resources (DENR) and the United Nations Industrial and Development Organization (UNIDO).

Resulting from this project was the “NAP for the Phase-Out of MAPs and the Management of the Associated Mercury-Containing Wastes“ that was formally turned over to the government at a ceremony held yesterday, June 30, in Mandaluyong City.

“As a civil society participant to the process of developing the country’s NAP, we commit to raising awareness about the hazards of mercury-added products, the benefits of switching to mercury-free alternatives, and the need to manage mercury-containing wastes in a way that will not cause further harm to people’s health and the environment,” Dizon said.

"We also intend to keep an eye on how the NAP will be implemented through the technical working group under the Inter-Agency Committee on Environmental Health," he added.

“This year alone from January to July, we conducted product test buys in 20 cities located in Regions 3, 4-A, 9, 10, Cordillera Administrative Region and the National Capital Region that netted 162 mercury-laden skin whitening facial creams illegally imported from China, Taiwan, Indonesia, Malaysia, and Pakistan,” he said.  As a result, the Baguio City Council, for example, is deliberating the enactment of an ordinance banning the manufacture, distribution and sale of mercury-containing skin lightening cosmetics in the city.

Dizon also cited the group’s push for the operationalization of the recycling facility with mercury recovery for busted or spent fluorescent lamps that has been idle for almost five years.

“We laud the DENR-UNIDO project for developing an initial work plan for the re-commissioning and eventual operation of the mercury lamp waste recycling facility.  We are beginning to see the light at the end of the tunnel,” he said.

The Minamata Convention on Mercury, which the Philippines signed in 2013, targets the phase-out by 2020 of certain MAPs as listed in Annex A of the treaty.

Also targeted for phase-out by 2020 are cosmetics including skin lightening products with mercury above 1 ppm (except mascara and other eye area cosmetics); pesticides, biocides, and topic antiseptics; and non-electronic devices such as barometers, hygrometers, manometers, thermometers, and sphygmomanometers.