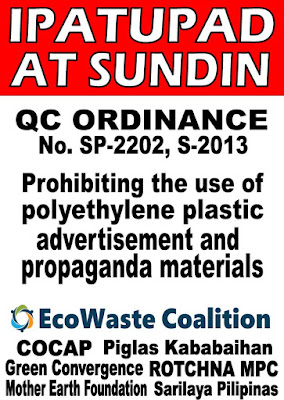 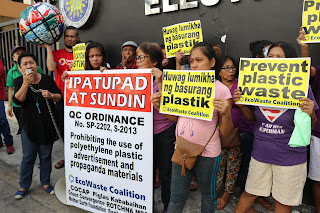 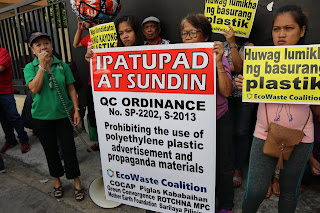 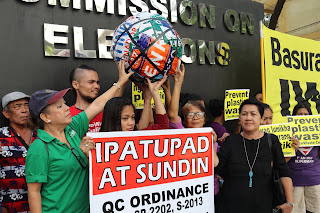 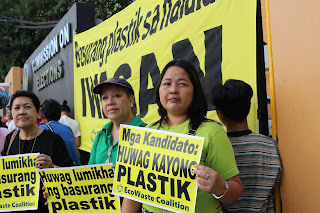 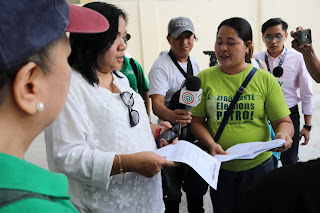 A waste and pollution watch group appealed to all local and national candidates and parties campaigning in Quezon City to abide by an environmental ordinance, which if enforced, will help in cutting the volume of plastic waste during the campaign period.

In an event held today outside the COMELEC-Quezon City Field Office, the EcoWaste Coalition urged poll bets to adhere to Quezon City Ordinance No. SP-2202, Series of 2013 “prohibiting polyethylene plastic advertisement and propaganda materials within the territorial jurisdiction of Quezon City.”

The event coincided with the sixth anniversary of the ordinance’s approval on March 25, 2013.

“We have gathered here under the scorching heat to persuade those running for public office to opt for a plastic-free campaign in keeping with QC Ordinance 2202-2013,” said Aileen Lucero, National Coordinator, EcoWaste Coalition.

“Quezon City is already generating too much garbage at 3,610 tons per day.  We cannot overemphasize the need for serious waste reduction efforts such as the citywide ban on polyethylene plastics used for electoral campaign,” she said.

“Single-use plastics like those used to woo voters add to the city’s huge waste production and should be totally avoided,” she added.   “The plasticization of the election campaign is bad for the environment and for democracy, too.”

To dramatize the problem with the plasticization of the campaign, the participants put up a globe representing Mother Earth that is wrapped with assorted plastic election posters.

To promote compliance to QC Ordinance 2202-2013, the EcoWaste Coalition have reached out to major political parties vying for the city’s elective positions for them to affirm their adherence to the said measure.

As of this writing, the Serbisyo sa Bayan Party (SBP) led by Vice-Mayor Joy Belmonte and the Katipunan ng Demokratikong Pilipino Party (KDP) led by former Representative Chuck Mathay have provided the EcoWaste Coalition with signed “affirmation of commitment” to abide by QC Ordinance 2202-2013.

The EcoWaste Coalition also urged the implementing agencies as designated by the ordinance “to remove, dismantle, confiscate, and cause the disposal or recycling of advertisement or propaganda materials made of polyethylene plastic.”

Among the agencies tasked to implement the ordinance are the Environmental Protection and Waste Management Department, Parks Development and Administration Department, Department of Public Order and Safety, and the Quezon City Police District.

Any firm or corporation caught selling, transporting or in possession of propaganda materials for use or installation in Quezon City shall face a fine of P3,000 up to P5,000 and revocation of mayor’s permit to operate.

Adhering to the ordinance, the EcoWaste Coalition pointed out,  will be in line with COMELEC Resolution 10488, which provides for the rules and regulations implementing Republic Act 9006, or the Fair Election Act, in connection with the May 13, 2019 elections.

“In local government units where local legislation governing the use of plastic and other similar materials exist, parties and candidates shall comply with the same,” the resolution from the poll body said.

“Parties and candidates are encouraged to use recyclable and environment-friendly materials and avoid those that contain hazardous chemicals and substances in the production of their campaign and election propaganda,” it further said.