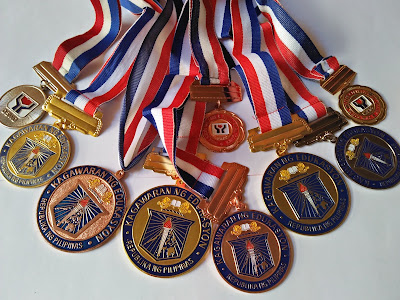 A waste and pollution watch group warns against lead-painted medals as school administrators, teachers, parents and students prepare for end of school year graduation and moving up ceremonies next week.

The EcoWaste Coalition urged school authorities to ensure that only lead-safe mementoes are procured and given to outstanding student achievers after finding some cheap, unlabeled medals sold for as low as P25 in Quiapo and Sta. Cruz, Manila tainted with lead paint.

Out of 15 medal samples, nine were found to contain lead in the range of 1,316  to 22,900 parts per million (ppm) as per X-Ray Fluorescence (XRF) screening.  For example, the yellow paint on the six samples of medals bearing the words “Kagawaran ng Edukasyon, Republika ng Pilipinas” were found to contain average lead content of 14,374 ppm.

“Children’s products must be safe from lead, a hazardous substance that is known to harm the brain, decrease intelligence, stunt development and growth, and cause behavioral disorders,” he said.

Department of Environment and Natural Resources (DENR) Administrative Order No. 2013-24, or the Chemical Control Order for Lead and Lead Compounds, prohibits the use of lead in the production of school supplies, as well as prohibits decorative paints with total lead content above the 90 ppm.

While medals were not explicitly mentioned in Department Order No. 4, series of 2017 issued by the Department of Education (DepEd) on the “Mandatory Use of Lead-Safe Paints in Schools,” the said directive applies to “paint-coated goods or products directly procured by the school as well as those sourced by other means such as through individual, group, corporate or local government donations,” the EcoWaste Coalition pointed out.

To emphasize the importance of toxics-free medals, trophies and the like, the group suggested amending DepEd Department Order No. 36, series of 2016 on “Policy Guidelines on Awards and Recognition for the K to 12 Basic Education Program” to include the safety from lead and other chemicals of concern of things to give to student awardees.


In lieu of medals, schools may opt to award students who have shown academic excellence, leadership and social responsibility with the appropriate certificates of achievement or recognition.

If medals are preferred, the EcoWaste Coalition advised schools to go for plain, unpainted medals unless the paint used is guaranteed compliant with the government’s regulation.

“As added precaution, schools should caution student recipients against playing with or biting painted medals to avoid potential exposure to lead through ingestion,” Dizon said.

According to the World Health Organization, “young children are particularly vulnerable to the toxic effects of lead and can suffer profound and permanent adverse health effects, particularly affecting the development of the brain and nervous system.”

“The consequences of brain injury from exposure to lead in early life are loss of intelligence, shortening of attention span and disruption of behavior. Because the human brain has little capacity for repair, these effects are untreatable and irreversible,” the WHO said.

“There is no known level of lead exposure that is considered safe,” the WHO has warned.