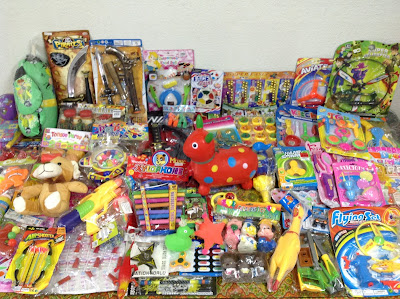 As the Christmas countdown commenced with the start of the “ber” months, a health and safety advocacy group urged the authorities to crack down on dangerous toys in the market.

“We appeal to the authorities to remove misbranded and hazardous toys from store shelves in line with the country’s toy regulations,” said Thony Dizon, Coordinator of the EcoWaste Coalition’s Project Protect.

“A rigorous crackdown on unsafe toys ahead of the peak season for toy shopping in December is needed to protect our children who are very vulnerable to injuries and chemical risks,” he added.

The EcoWaste Coalition pressed for toy safety law enforcement action to ensure that kids are protected against potential dangers to their health and safety from misbranded and hazardous toys.

The group’s appeal came on the heels of its latest toy sampling revealing extensive non-compliance to Republic Act 10620, or the Toy and Game Safety Labeling Act of 2013.

As per R.A. 10620, toys that fail to comply with the required labeling requirements “shall be considered a misbranded or banned hazardous substance.”

Out of the 65 toy samples purchased from discount shops in Divisoria and in legitimate toy stores for P20 to P180 each, 63 were found to contain inadequate labeling information, which by law will make them “misbranded” or “banned hazardous substance.”

According to the Food and Drug Administration, toys and childcare articles with the required product notifications should contain the following labeling requirements: license to operate (LTO) number, age grade, cautionary statements/ warnings, instructional literature, item/ model/ stock keeping unit (SKU) number, and manufacturer’s marking, including the complete name and address of the manufacturer or distributor.

Based on the group’s scrutiny of the product labels, the EcoWaste Coalition revealed that out of 65 samples, only 23 have the required License to Operate (LTO) number on the label.  The authenticity of the LTO numbers provided has yet to be determined.

Of the 65 samples, only 7 provided information about their manufacturers or their local importers or distributors.

Only 2 samples were found to be completely compliant with the government’s labeling requirements for toys.

R.A. 10620 states that non-compliant toys and games “shall be withdrawn from the market at the expense of the manufacturer or importer and shall not be allowed to be distributed, sold or offered for sale in the Philippines.”

The law requires the Department of Trade and Industry to “regularly publish every six months the list of all manufacturers, importers, distributors, and retailers who failed to comply with the requirements” of R.A. 10620.

It further requires the Department of Health to “publish every six months the list of all misbranded or banned hazardous substances the sale, offer for sale and distribution of which shall not be allowed” under R.A. 10620.

The EcoWaste Coalition and Laban Konsyumer, Inc. have repeatedly pressed the health and trade departments to issue the Implementing Rules and Regulations for R.A. 10620, which have yet to be promulgated four years after the law was approved on September 3, 2013 by then President Benigno Aquino III.