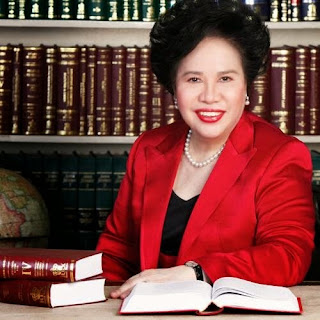 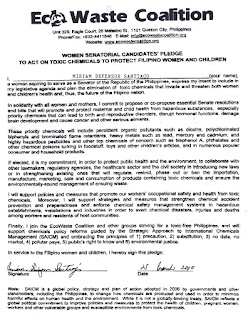 An environmental health organization has thrown its support behind a proposal urging President Rodrigo Roa Duterte to confer the country’s premier recognition to the late Senator Miriam Defensor Santiago who passed away on September 29 last year.

In a press statement, the EcoWaste Coalition expressed its support to Senate Resolutions 508 and 517 filed by Senators Grace Poe and Sonny Angara urging Duterte to nominate the late senator for conferment of the Quezon Service Cross, “the highest national recognition of outstanding civilian service in the gift of the Republic.”

“We join the senators in requesting President Duterte to bestow the award to Senator Santiago for the exemplary service she rendered as a judge, government official and legislator. Conferring the nation’s highest award to the late senator will be a recognition, too, for all women in public service as agents for change,” said Eileen Sison, President, EcoWaste Coalition.

Beyond this award, the EcoWaste Coalition urged members of the 17th Congress to honor Senator Santiago by resurrecting key environmental and health bills she filed in the 16th Congress that were not consummated.

In line with her “Pledge to Act on Toxic Chemicals to Protect Filipino Women and Children,” Senator Santiago filed at least 75 bills and resolutions in the 15th and 16th Congress addressing important chemical, product and waste issues.

“The passage of the PRTR bill sponsored by Senator Santiago would have resulted to the establishment of a publicly accessible database that will inform communities what chemicals or pollutants are being discharged by facilities or industries, where and  how much.  Enacting such law will affirm and uphold the public’s right to know,” said campaigner Abigail Aguilar of Greenpeace, a member of the EcoWaste Coalition.

PRTRs are catalogues or registries of potentially harmful pollutant releases or transfers to the environment from a variety of sources, including information on the nature and quantity of such releases and transfers to the air, water and soil as well as about wastes transported to treatment and disposal sites, Greenpeace explained.

“It will be a waste if Senator Santiago’s environmental and health legislative measures like the PRTR are simply kept in the archives,” Sison said.

Sison also recalled that Senator Santiago twice filed a resolution calling for a Senate inquiry on the illegal trash imports from Canada “to protect the country from becoming a global dump for hazardous wastes.”

Link to the “Pledge to Act on Toxic Chemicals to Protect Filipino Women and Children” signed by Sen. Miriam Defensor Santiago:

Links to some of the bills filed by Sen. Miriam Defensor Santiago in the 16th Congress: