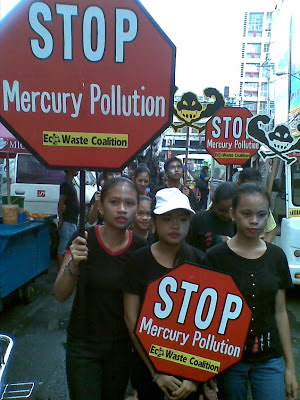 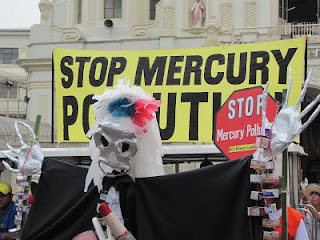 The Minamata Convention, the world’s first legally binding global agreement to reduce mercury pollution, becomes International law on Wednesday, August 16th, 2017. Environmental health leaders from IPEN (a global network of NGOs in over 100 countries combatting toxic pollutants) celebrate the historical global health and environmental treaty and call on world governments to take the next steps to ensure “no more Minamatas.”

The treaty, say IPEN leaders, is the beginning of the end of mercury in the global economy. But to actualize the aim of the treaty—protecting the health of current and future generations, food chains and the environment from mercury pollution— requires stronger coordinated global action. Ending mercury use and emissions at its primary sources such as small-scale gold mining, coal fired power plants and cement kilns and halting the global mercury trade are key. Identifying and remediating contaminated sites are also essential to protecting human health from the highly toxic metal.

The Minamata Convention, the first legally binding chemical treaty in a decade, recognizes that mercury is a global threat to human health, livelihood and the environment.  Currently 74 countries have ratified the treaty, exceeding the threshold of 50 countries that allows the treaty to enter into force.

“Mercury-contaminated sites have become a slow disaster in many countries, poisoning fish stocks and making communities sick. It is not enough to ban new industrial uses. To prevent mercury devastation for new generations, we need unified guidelines so that countries can identify and control risk from these sites and clean up communities where heavy mercury loads in the environment perpetuate harm to current and future generations,” said IPEN Mercury Policy Advisor, Dr. Lee Bell.

Use of mercury in gold mining and coal fired power plants are leading causes of mercury emissions on the planet. Small scale gold mining is an extremely hazardous process that sickens miners, their families and communities. According to the United Nations Environment Program, approximately 15 million people in over  70 countries engage in artisanal small scale gold mining (ASGM) activities for their livelihood, practices that mainly use mercury. Although declining, mercury from illicit sources have been and are still being used in many illegal small-scale gold mining practices.

“The tragedy of mercury causes profound health and economic impacts in some of the most impoverished communities around the world; communities that subsist through small scale gold mining. Unless we take global action to end the international mercury trade that dumps mercury into communities near gold mining sites, we will continue to poison some of the most vulnerable and marginalized people on our planet,” said IPEN lead for ASGM and Goldman Prize Winner Yuyun Ismawati.

To protect residents from adverse health effects, countries must improve their mercury monitoring, health measures, and food advisories, and increase the capacity of health practitioners to understand and tackle issues related to mercury poisoning.

IPEN Co-Chair and Goldman Prize Winner Dr. Olga Speranskaya says, “Monitoring of mercury levels in food products must be improved. The majority of developing countries, and countries with economies in transition, do not issue recommendations to pregnant women on daily intake limits of mercury-containing food products such fish and rice, with dire consequences. Most developing countries lack limits for mercury levels in fish. Those that have established limits, often set them lower than relevant limits of developed countries, thus reducing the level of protection of their residents from the adverse health impacts of mercury.”

Just as the treaty itself emerged from the work of hundreds of NGOs around the world to raise the alarm on far-reaching mercury impacts, the NGO community is resolved to ensure the treaty is effective.

“Our community of global environmental health, justice, and human rights NGOs will continue to hold the world’s governments accountable to uphold the spirit and intent of the treaty, to encourage more countries to ratify, and to advocate for governments to take necessary actions so that this important agreement successfully protects the many millions of humans threatened by mercury,” said Pamela Miller, IPEN Co-Chair.

For her part, Aileen Lucero, National Coordinator of the EcoWaste Coalition ( an active member of IPEN), said: “We appeal to our political leaders, particularly President Rodrigo Duterte, to cause the immediate ratification of the Minamata Convention.  Ratifying the mercury treaty and ensuring its effective enforcement, nationally and internationally, will be the just way to honor Minamata and affirm our commitment against a repeat of such catastrophic mercury poisoning tragedy in the Philippines and elsewhere.”

The historical treaty is named after the Minamata disaster in Japan in which industrial dumping of mercury into Minamata Bay killed and sickened tens of thousands of people.

Mercury exposure damages the nervous system, kidneys, and cardiovascular system. Developing organ systems, such as the fetal nervous system, are the most sensitive to the toxic effects of mercury, although nearly all organs are vulnerable. Human exposure to mercury occurs primarily through the consumption of contaminated fish and through direct contact with mercury vapor through small scale gold mining practices. Very small amounts of mercury, as little as 1 ppm measured in hair, has been recognized by the US EPA as a threshold above which mercury can cause brain damage in developing fetuses. New scientific literature is suggesting that mercury is even more harmful than previously understood, with negative neurological impacts noted at levels above 0.58 ppm.

Coal fired power plants, the second greatest source of mercury contamination and a primary contributor to climate change, release atmospheric mercury which deposits into the world’s oceans and enters the food chain, accumulating in fish and burdening human health.
###

IPEN is a network of non-governmental organizations working in more than 100 countries to reduce and eliminate the harm to human health and the environment from toxic chemicals.