Over 100 Groups Clamor for PH Ratification of Treaty vs. Mercury Pollution

Civil society groups pressed the government to join the 74 countries that have so far ratified a historic global agreement to combat mercury pollution, which will enter into force tomorrow, August 16.

In an urgent letter sent last Monday to President Rodrigo Roa Duterte, over 100 environmental, health and labor rights advocates urged the government to work for the immediate ratification of the Minamata Convention on Mercury and to secure the required Senate concurrence prior to the First Conference of Parties (COP1).

While the Philippines through the Department of Environment and Natural Resources (DENR) has signed the Minamata Convention on Mercury in 2013, the government has yet to ratify the historic treaty.

“We owe it to the people of Minamata, the Japanese city after whom the agreement was named, and to the Filipino people to ensure that the convention is ratified and enforced to protect public health and the environment against mercury pollution,” said Eileen Sison, President, EcoWaste Coalition.

Minamata suffered heavily from decades-long dumping of mercury-tainted industrial wastewater from Chisso chemical factory into the Minamata Bay, poisoning the fish that people ate and leading to crippling illnesses known today as the Minamata disease.

To date, 74 governments have ratified the convention.

The groups are pushing for the treaty’s expedited ratification so that the Philippines could attend the COP1 as a State Party and not as a mere observer. The COP1 will take place on September 24-29 this year in Geneva, Switzerland.

"Ratifying  the Minamata Convention on Mercury will further strengthen our nation’s efforts to prevent, if not eliminate, threats of  mercury pollution as this will allow the Philippines to effectively engage in the treaty processes, address gaps in existing regulations, and gain access to financial resources and beneficial technology transfer and capacity-building opportunities," the groups explained.

The groups noted that the Philippines actively and meaningfully participated in the mercury treaty negotiations from 2010-2013.

According to the Ratification Dossier prepared by the DENR with assistance from the Swiss Confederation and the United Nations Institute for Training and Research, “the existing policies, programs and regulations have, to some degree, prepared the Philippines in terms of fulfilling the requirements of the Convention.”

“Despite the economic cost to comply with the provisions of the Convention, the long-term benefits of becoming a Party far outweigh the disadvantages,” the dossier said, stressing “the Convention is consistent with the country’s basic policy to protect and preserve the right to health of Filipinos, and the right of the people to a balanced and healthful ecology.”

Key highlights of the treaty include a ban on new mercury mines, the phase-out of existing ones, the phase out and phase down of mercury use in a number of products and processes, control measures on emissions to air and on releases to land and water, and the regulation of the informal sector of artisanal and small-scale gold mining.

While other key agencies like the Departments of Health, Labor and Employment, Science and Technology and Trade Industry have agreed to the treaty ratification, the DoE has yet to provide the DENR with its Certificate of Concurrence. 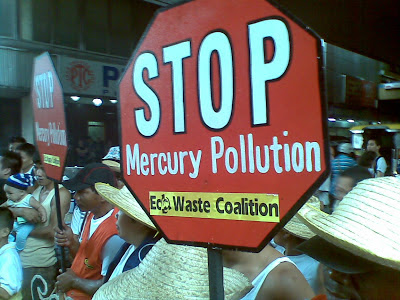