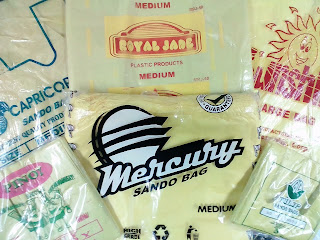 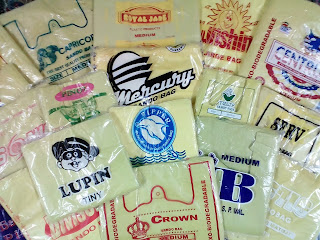 Yellow plastic sando that screened positive for lead in excess of 100 parts per million. 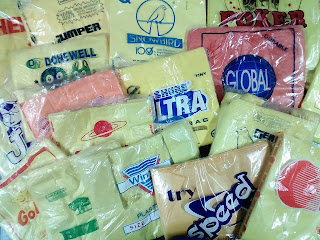 Yellow and orange plastic sando bags with no detectable lead.

Following the controversial cleanup drive last week in Manila Bay that prompted Mayor Joseph Estrada to publicly apologize and take full responsibility for the hullabaloo, a waste and pollution watch group asked the local chief executive to make up for the controversy by enforcing the city’s dormant plastic bag ban ordinance.

Then Mayor Alfredo Lim signed City Ordinance 8282 on September 3, 2012, which prohibits the use of plastic bags for dry goods and regulates their use for wet goods.

“The unbridled sale, use and disposal of plastic bags in Manila is evident everywhere and we could not help but wonder why Ordinance 8282 was not implemented at all,” Alejandre said, noting “consumer demand for plastic bags continues to thrive without hindrance and the streets and esteros are forever strewn with plastics and other litter that ultimately pollute Manila Bay.”

As the problem is not only with the sheer volume of plastic trash that is visible to the naked eyes as shown in the waste audits conducted in Manila Bay by the EcoWaste Coalition and its partner groups in 2006, 2010, 2014 and 2016, the group for the second time purchased plastic sando bags to screen them for their toxic content.

The group bought 35 packs of assorted brands of yellow plastic sando bags on July 29 to August 1 from plastic wholesalers and retailers at Divisoria, Paco and Quiapo, Manila and screened them for lead, a toxic chemical, using an X-Ray Fluorescence (XRF) device.

As per Department of Environment and Natural Resources (DENR) Administrative Order 2013-024, also known as the Chemical Control Order for Lead and Lead Compounds, the use of lead in the production food and beverage packaging, particularly for packaging that comes directly in contact with food, is prohibited.

XRF screening revealed that 18 brands of yellow plastic bags, including five brands of oxo-biodegradable plastic bags, contain lead from 116 to 3,012 parts per million (ppm), way above the permissible limit under the European Union (EU) Packaging Directive.

Article 11 of the EU Packaging Directive provides a limit of 100 ppm by weight for the sum of four restricted metals such as lead, mercury, cadmium and hexavalent chromium in packaging or packaging components.

While lead was not detected in the said 17 brands, the EcoWaste Coalition emphasized that the unchecked use of single-use plastic bags, which are mostly made from petroleum, contribute to natural resource depletion and pollution that drives climate change, while reinforcing the ever growing throw-away culture.

The group stressed the need for Manila to enforce its plastic bag ban, and for Congress to enact a national law banning plastic bags, including the so-called oxo-biodegradable bags.

The group further emphasized the need for the government to adopt a legislation that will limit, if not remove, toxic metals such as  lead, mercury, cadmium and hexavalent chromium in packaging materials to protect public health and the environment.