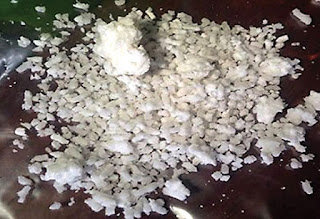 Video grab from ANC shows the styrofoam-like appearance of the synthetic rice, which is reportedly made from potatoes, sweet potatoes and resin (Philippine Star, 2 July 2015).

“Consumer awareness about this fraudulent trade in plastic-containing rice and caution when making purchases are necessary to protect the public from poison rice,” said Thony Dizon, Coordinator of the EcoWaste Coalition’s Project Protect.

“Consumers should exercise extra vigilance when buying rice, a staple food source, and immediately report any unlawful sale of imitation rice to the authorities,” he emphasized.

“Errant traders should be prosecuted and punished to the full extent of the law,” he added.

Imported synthetic rice, which is made from potatoes and sweet potatoes mixed with plastic industrial resin, has reportedly entered the country with consumer complaints being filed in Davao City and Davao del Sur.

Doctors and dieticians have warned that eating synthetic rice could be poisonous and seriously harm the digestive system.

Being a rice-eating nation of over 100 million people, it’s essential for the government and the industry to ensure that only rice stocks that have passed strict quality control are sold to consumers, the EcoWaste Coalition said.

Dizon backed the call made by Senator Cynthia Villar, Chairperson of the Senate Committee on Agriculture, urging the Department of Agriculture (DA) and the National Food Authority (NFA) to inspect rice warehouses and shops to identify peddlers of fake rice.

In addition, the EcoWaste Coalition urged the DA and the NFA to come up with a public service announcement that will inform consumers about the risks of consuming synthetic rice, as well as guide consumers in identifying such type of rice.

Also, the group requested the DA and the NFA to create a hotline that can receive complaints on fake rice via phone calls and text messages and assist consumers in obtaining redress.

These practical measures, the EcoWaste Coalition stressed, are consistent with the state policy as provided for in the Consumer Act of the Philippines, which seeks to protect consumers against hazards to health and safety and protect them from deceptive, unfair and unconscionable sales acts and practices.