SONA 2015: EcoWaste Coalition Hopes P-Noy Will Pull A Surprise and Send Garbage Back to Canada 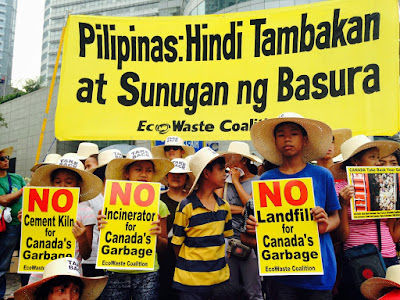 For the EcoWaste Coalition, President Benigno S. Aquino III’s last State of the Nation Address (SONA) tomorrow may yield a pleasant surprise as regards the Canadian garbage controversy if only the chief executive would listen to his bosses.

The country has been embroiled in a prolonged controversy over Canada’s refusal to re-import illegal garbage sent to the Philippines dating back to June 2013 with the influx of 55 shipping containers of mixed trash disguised as “plastic scraps”  consigned to Valenzuela City-based Chronic Plastics Inc.

Wastes from 26 of these 55 containers have been illegally dumped at a privately-owned Metro Clark landfill in Capas, Tarlac, the home province of President Aquino, provoking protests from the provincial and local government authorities and from Tarlaqueños themselves.  Metro Clark is only authorized to receive domestic wastes from Tarlac and a few areas, and not foreign wastes.

“It’s not too late for the President to correct this environmental injustice that has allowed a foreign country to dump their garbage into our territory with the consent of our customs and environmental authorities in brazen disregard of public health and safety and stubborn violation of national and international laws,” said Rene Pineda, Vice-President, EcoWaste Coalition.

“At his last SONA, the President can tell the Filipino people, his bosses, that it was wrong to dump Canada’s garbage in Tarlac and that no more garbage imports will be disposed of in any landfill, incinerator or cement kiln anywhere in the country under his watch,” he suggested.

“The President can then order the Departments of Environment and Natural Resources and Finance, particularly the Environmental Management Bureau and the Bureau of Customs, to send the garbage back to Canada by all legal means,” he said.

“It will only take a minute for the President to assure his bosses that he is with them in asserting that our country is not a global trash bin,” he pointed out.

A presidential directive calling for the return of Canada’s garbage to its origin would surely draw cheers not only from environmental justice defenders, but from all sectors of the society, the EcoWaste Coalition said.

To further assure the people that such incident would not be repeated, the EcoWaste Coalition urged P-Noy to also order a comprehensive review of existing regulations to make the importation requirements and procedures tighter for so-called recyclable materials and  proactively prevent garbage dumping from overseas.

Private traders and  government regulators must ensure that only clean and properly sorted recyclable waste materials are sent to our country for non-toxic recycling, and not for disposal purposes, the EcoWaste Coalition said.

The group also insisted that the government should ratify the 1995 amendment to the Basel Convention on the Control of Transboundary Movements of Hazardous Waste and Their Disposal, a global treaty that seeks “to protect, by strict control, human health and the environment against the adverse effects which may result from the generation and management of hazardous wastes and other wastes.”

The Basel Ban Amendment, as it is called, prohibits the export of hazardous waste from developed countries to developing countries.  The ban applies to export for any reason, including recycling.