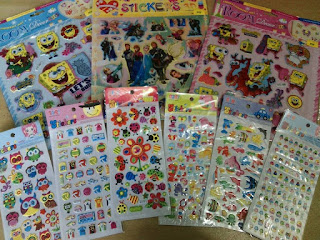 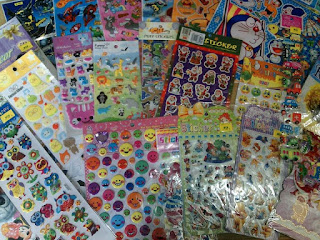 Not all cute stickers that kids use for art and craft projects as well as for personal accessories are suitable for children due to their lead content.

The EcoWaste Coalition, a non-profit environmental and health watchdog  group,  issued this observation after detecting lead, a brain-damaging chemical, in 9 out 32 sets of colorful kiddie stickers that it recently bought and checked for lead.

As part of its continuing drive to promote children’s safety from harmful chemicals, the group purchased 32 sets of stickers that are marketed for children’s leisure activities from retailers in Quiapo, Manila and Cubao, Quezon City.

The stickers feature assorted pretty designs such as popular cartoon figures, superheroes, animals and flowers, costing from P7 to P40 per set.  Each set contains from four to as much as 116 stickers.

“The XRF device detected lead in the range of 508 to 670 parts per million (ppm) in some of the samples way above the regulatory limits,” said Thony Dizon, Coordinator of the EcoWaste Coalition’s Project Protect.

The Chemical Control Order for Lead and Lead Compounds issued by the Department of Environment and Natural Resources prohibits the use of lead in the production of children’s products such as toys and school supplies.

“As there is no level of lead exposure that is deemed ‘safe’ for kids, it’s important that all preventable sources of exposure are minimized if not altogether eradicated,” Dizon.

Dizon expressed concern that young children may bite, chew or swallow the very attractive stickers and directly ingest the lead and other chemical substances present on the stickers.

As the stickers lack chemical labeling information that should help guide consumers in picking non-toxic ones, Dizon emphasized the importance of adult supervision when children use such art materials.

According to doctors, young children are very susceptible to lead exposure due to their immature immune systems, higher metabolisms and their small size.

Their tendency to chew objects they come in contact with, including non-food items, make them at greater risk of ingesting lead.

According to the World Health Organization (WHO), “at lower levels of exposure that cause no obvious symptoms and that previously were considered safe, lead is now known to produce a spectrum of injury that causes loss of cognition, shortening of attention span, alteration of behavior, dyslexia, attention deficit disorder, hypertension, renal impairment, immunotoxicity and toxicity to the reproductive organs.”

“For the most part, these effects are permanent. They are irreversible and untreatable by modern medicine,” the WHO said.