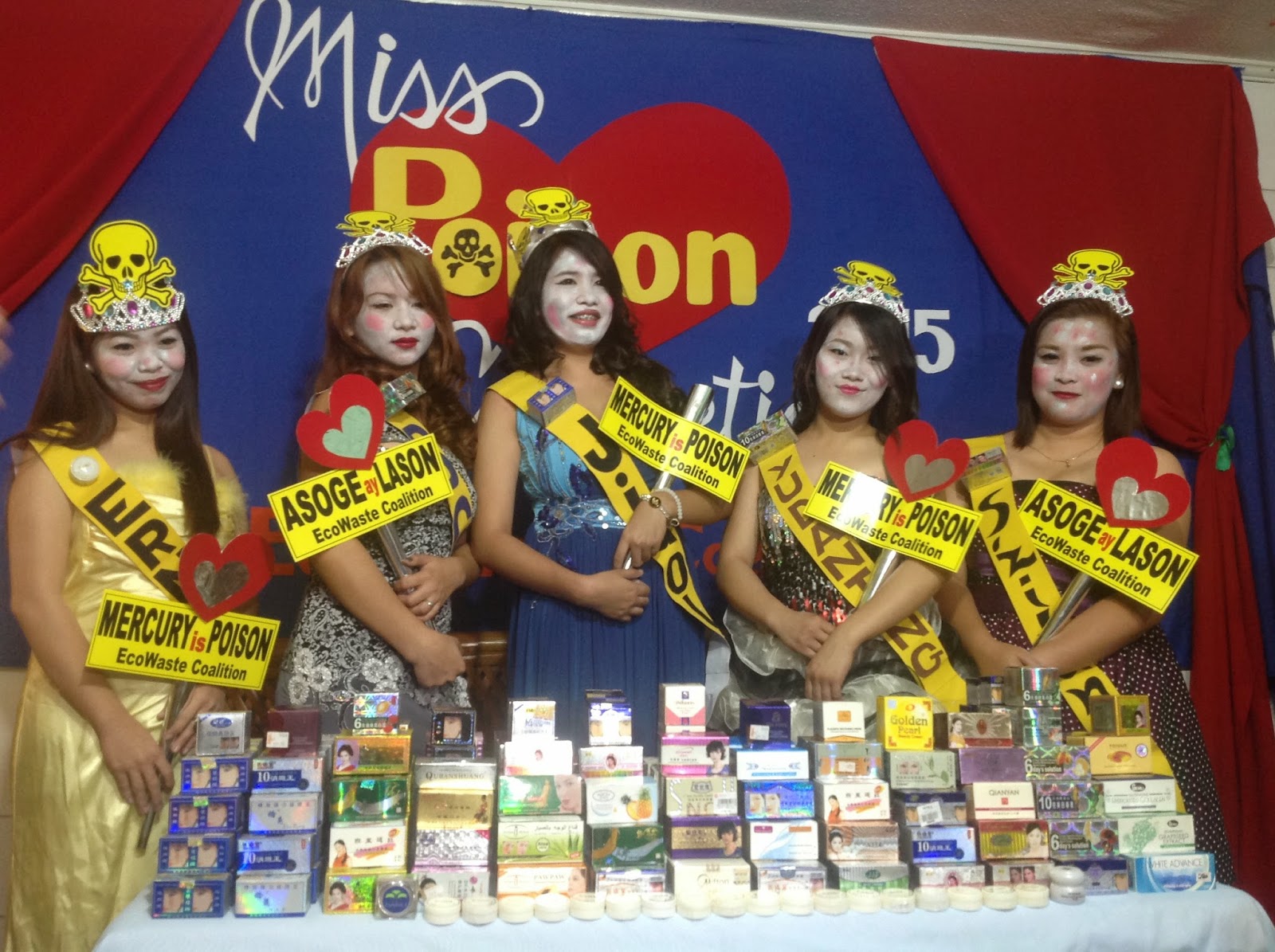 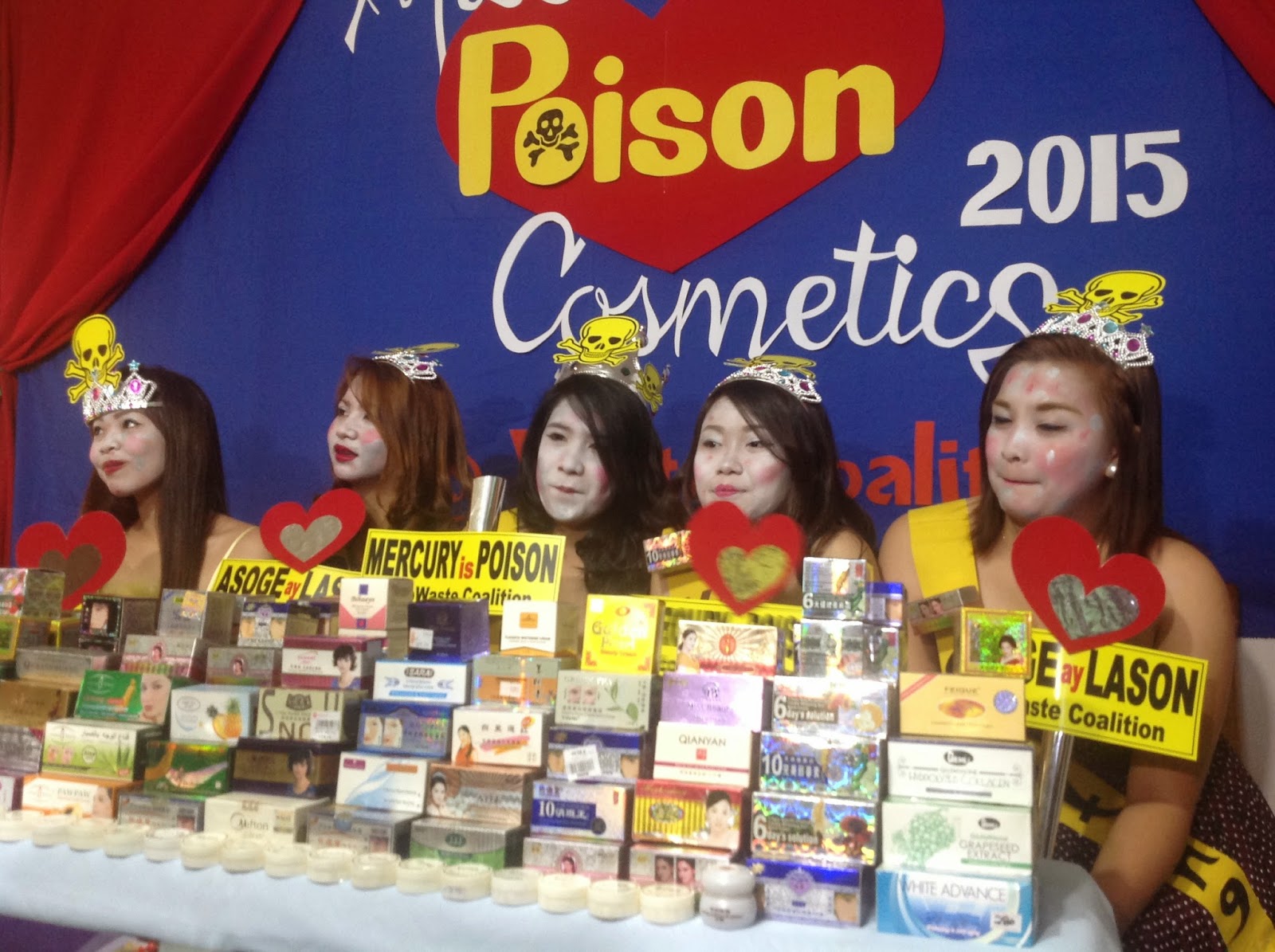 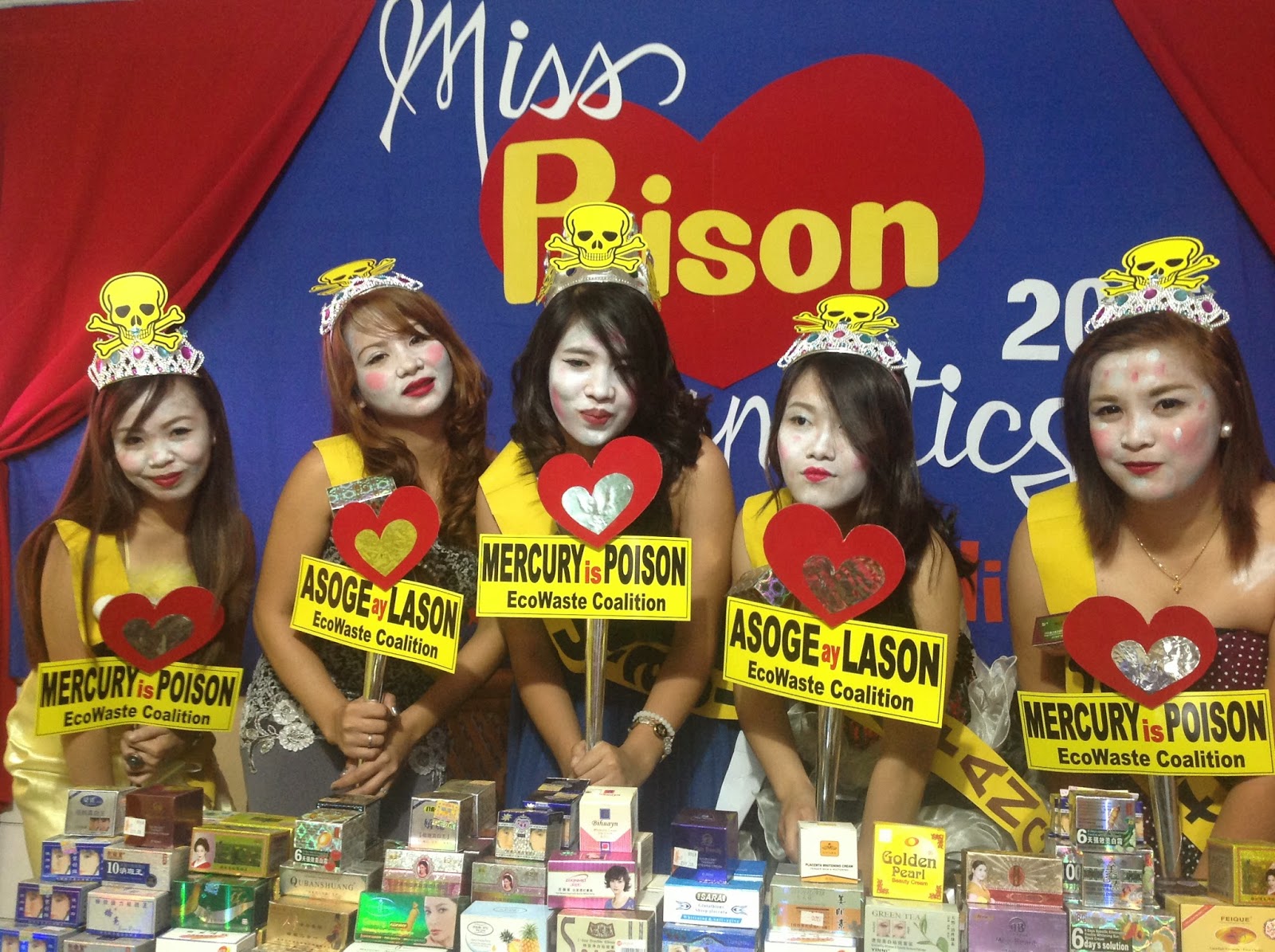 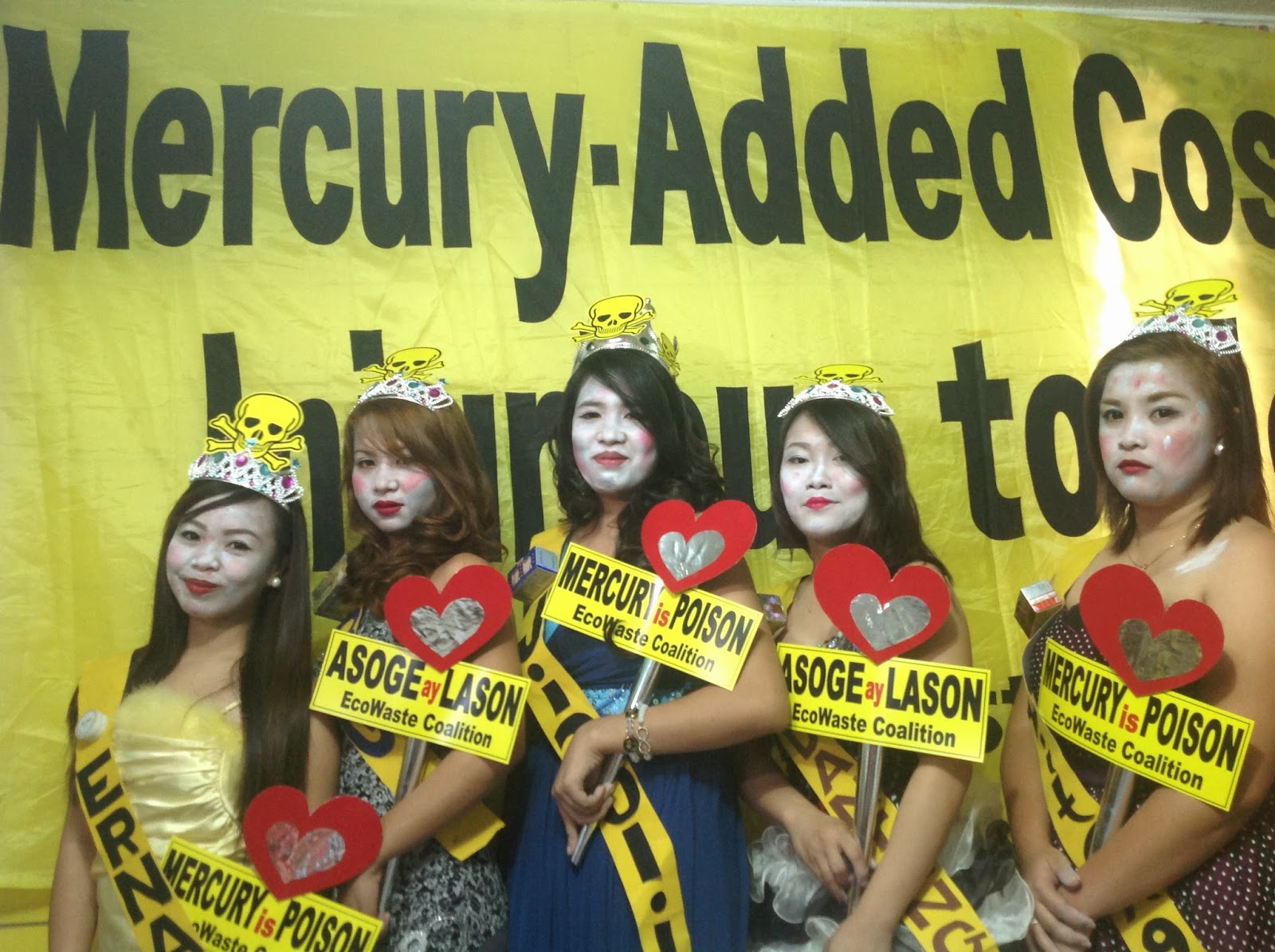 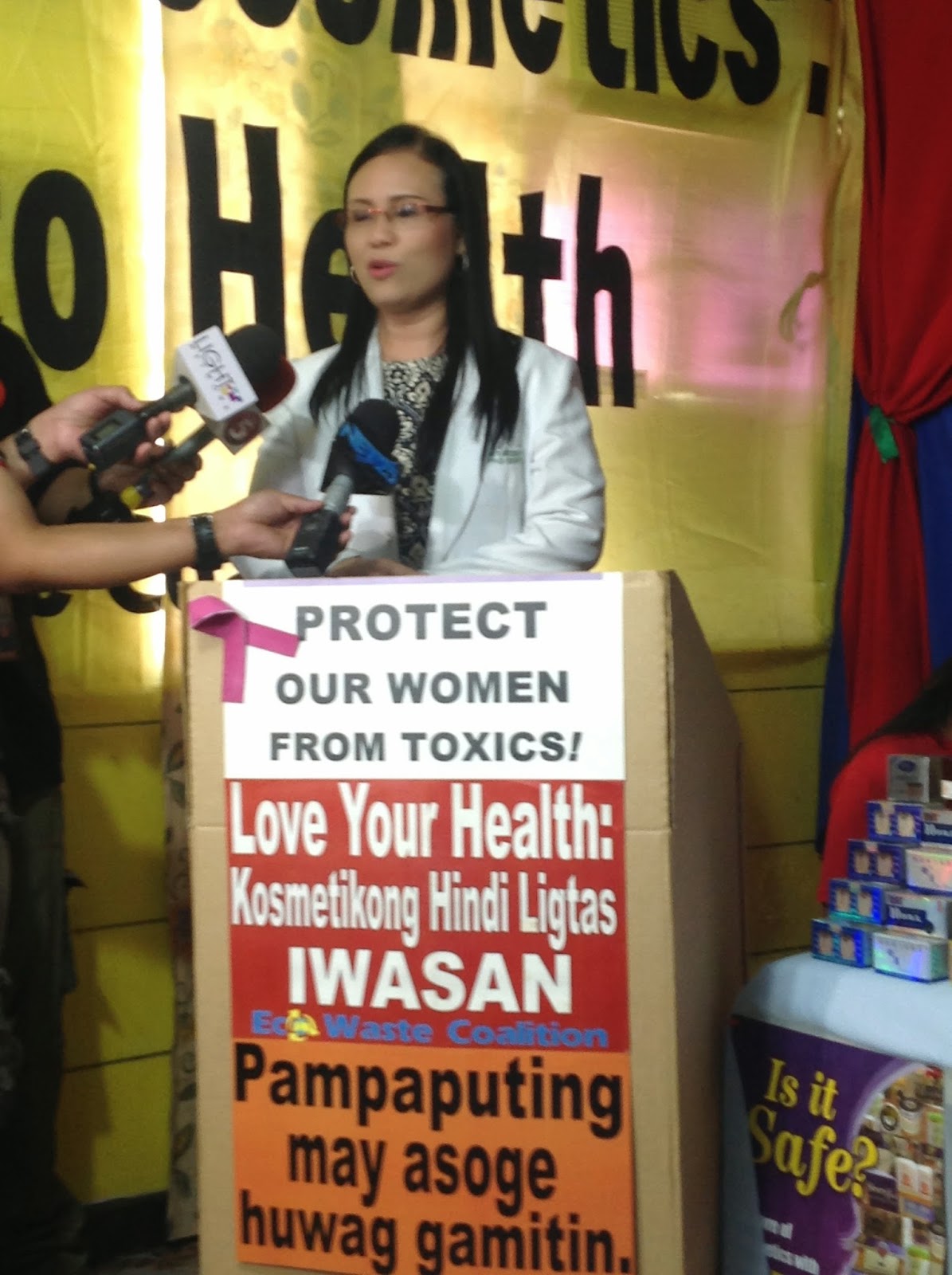 To celebrate Valentine’s Day, the toxics watchdog EcoWaste Coalition, held a mock beauty pageant in Quezon City to alert the public, particularly our women, against the proliferation of skin lightening cosmetics loaded with mercury, a toxic chemical.

The pageant, dubbed as “Miss Poison Cosmetics 2015,” had “toxic beauties” as contestants, namely “Miss BG,” “Miss Erna,” “Miss Jiaoli,” “Miss S’Zitang” and “Miss Yudantang,” representing brands of illegal mercury-laden skin whitening products that continue to thrive in the market despite being banned by the Food and Drugs Administration (FDA).

Donning tiaras with the toxic symbol of skull and crossbones and holding heart-embellished sceptres with the warning “Mercury is Poison,” the contestants’ white faces were made to appear swollen and with blotches and scars in silver, the color of mercury.

“We’ve staged this event to notify our women and other consumers against serious health threats posed by applying mercury-laced facial whitening creams onto the skin. Exposure to mercury via dermal absorption may discolour, inflame and scar the skin instead of the promised lighter complexion. It will also cause decreased skin’s resistance to bacterial and fungal infections,” said Aileen Lucero, Coordinator, EcoWaste Coalition.

“Aside from being injurious to the skin, exposure to mercury has toxic effects to the brain and the central nervous system and the kidneys,” she added.

The World Health Organization warns that “mercury is toxic to human health,” listing it as one of the “ten chemicals of major public health concern.”

The EcoWaste Coalition intensified its campaign against mercury in cosmetics after collecting fresh data confirming the widespread trade of such contraband cosmetics in 50 cities across the archipelago, from Baguio, Manila, Cebu to Zamboanga.

Citing figures from its newly-released report “Beauty and the Risk,” Lucero reported detecting mercury above the national and ASEAN regulatory limit of 1 part per million (ppm) in 316 out of the 355 samples (89%) of skin whitening creams that the group bought and screened for mercury using an X-Ray Fluorescence (XRF) device.

The skin whitening products, with no market authorization from the FDA, are being sold for P16.75 to P350 each in various retail outlets, mostly in food and herbal supplement shops, general merchandise stores and Chinese drug stores.

The so-called “Dirty Dozen,” or samples with the highest mercury content per brand, includes:

The EcoWaste Coalition’s investigation also showed that 41 of the over 100 skin whitening cosmetics banned by the FDA during the last five years are still being sold in the market. The group further discovered 26 new brands of mercury-containing skin whitening creams that should be banned and immediately removed from the market.

The results of the investigation drew immediate reaction from advocates for chemical safety and environmental health, particularly from the International POPs Elimination Network (IPEN), a global civil society network striving for a toxics-free future, which assisted the EcoWaste Coalition in undertaking the study.

In an e-mail sent to the EcoWaste Coalition, Lee Bell, IPEN’s Mercury Policy Advisor, congratulated the group for completing “a compelling and timely investigation into the public health hazard posed by toxic mercury in cosmetics.”

“The recommendations of this report should be fully implemented to stem the tide of illegal mercury-laced imports in the Philippines and meet the requirements of the Minamata Convention on Mercury as well as domestic regulations,” he said.

Bell affirmed that “IPEN continues to support the work of NGOs such as the Ecowaste Coalition in over 20 countries around the world to address the mercury pollution crisis and promote early ratification of the Minamata Convention."

Wow, absolutely fantastic blog. I am very glad to have such useful information. Thanks.
Welcome to Green Herbz 2014 Potpourri Herbal Spice

Thanks for providing such an useful and informative information about Interesting Things. Glad to read it. Will bookmark your post and visit again for more informative post. Keep Sharing.
Herbal Potpourri

Thanks for Sharing this website link. Natural incense can also help in retrieving from several emotional disorders.
LegalSyntheticBud.com LLC

Great work. Truly speaking I never seen a blog like that. Absolutely superb work. Good luck. Thanks for such an informative post.
buy spice incense


Superb posts with lots of information!!! This is really the most miraculous blog site dude….scarborough town centre hours


Hello! I just would like to give a huge thumbs up for the great info you have here on this post. I will be coming back to your blog for more soon.
spice incense for sale online

This is quite interested information, it helps us a lot. Keep publishing and best of luck for your next blog.

Your blog is for sure interesting and I'm glad I read it through. Thanks for sharing

ALL THANKS TO DOCTOR STEVE FOR HELPING ME WITH THE ISSUES OF MISCARRIAGE.
I had a miscarriage in 2013. We’d only been trying to get pregnant for a couple of months, and when I got that first positive pregnancy test, it felt a little bit like a whoops! Well, okay. One evening, I came home from a book reading and was bleeding. I quickly turned to all my pregnancy books, and to the internet, all of which told me that a little bleeding could be normal and fine, but the longer it went on, and the more pain I was in, what was happening became clear. The bleeding wasn’t stopping, and neither was the pain. Even though it was obvious enough what was going on, I refused to take any pain medication. Because you’re not supposed to take blood thinners when you’re pregnant. That was how I lost my first pregnancy. And in two others in the same year I had to look for solution, because our family Doctor could not help, he has given us a lot of prescription but non worked, I had to look for solution on line and saw the contact of Dr Steve I contacted him through the mail and made purchase for his product which is a permanent solution to Miscarriage. Now am having two kids and I promise to tell the whole world about him if he helps me out. You can contact him for solution on drsteve833@gmail.com for a good solution to miscarriage.

my name is Zoe Heffernan from London, Am here to share how lady cafai unblocked my both tubes with the herbal medicine which i ordered IYa Hindi product from the online i got from this group,of which i was told by my doctor after several attempts trying to get pregnant that both my tubes were blocked. right now am with the scan and the test proving that my tubes are unblocked and as i'm giving this testimony am already 8 months pregnant. i just want to say a big thanks to IYa Hindi herbal for the work done, IYa Hindi herbal has really proven to me that her herbal medicine works perfectly whatsapp messenger +19145295224/visits his register website: https://iyahindinative.com/