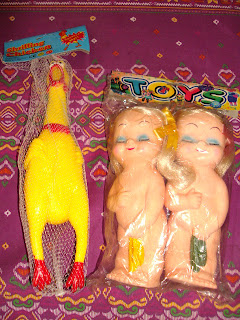 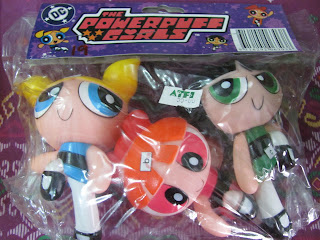 A toxics watchdog has discovered health-damaging synthetic chemicals called phthalates in some polyvinyl chloride (PVC) plastic toys way above the 0.1 percent by weight limit set by the Department of Health (DOH).

The EcoWaste Coalition’s disclosure came on the heels of a toy scandal in Italy that saw the police seizing last Monday some 300,000 China-imported plastic dolls, accessories and other items containing high concentrations of phthalates.

Phthalates refer to a group of industrial chemicals used to make PVC plastic softer, pliable and durable, and, which have been shown to disrupt normal endocrine or hormone functions.

Classified as endocrine disrupting chemicals or EDCs, phthalates have been blamed for genital deformities such as deformed penises and undescended testicles, for developmental abnormalities such as cleft palate, for the early onset of puberty and other health problems, including cancer.

“It’s important for the toy industry to assure consumers that only safe toys are offered for sale in the market, especially in bargain hubs like Baclaran and Divisoria, as the buying public have no capacity to tell or to test products for harmful chemicals such as phthalates,” said Aileen Lucero of the EcoWaste Coalition’s Project Protect.

“As mouthing of toys laced with phthalates can lead to phthalate exposure, we advise parents to refrain from buying PVC toys and to insist on knowing the chemical ingredients of a product before making any purchase,” she added.

Laboratory analysis showed three of the five samples laced with phthalates in violation of the 0.1 % by weight limit set by the DOH:

3. A toy doll had 9.10% of diisodecyl phthalate (DIDP) and 0.21% dibutyl phthalate (DBP).
All three tainted samples were made of PVC plastic materials, and none of them provided information about their chemical contents, Lucero stated.

"Phthalate plasticizers are not chemically attached to PVC plastic materials and can leach and transfer to the air, water, dust and soil. As a precautionary measure, the DOH has disallowed the use of certain phthalates beyond 0.1% by weight in any children's articles and in toys that kids can put in their mouths," said Dr. Agnette Peralta, Director, DOH Bureau of Health Devices and Technology.

Under an administrative order signed by Health Secretary Enrique Ona on December 14, 2011, “it shall be unlawful for any person to manufacture for sale, offer for sale, distribute in commerce, or import into the country any children’s toys that contains concentrations of more than 0.1 percent by weight of di-(2-ethylhexyl) phthalate (DEHP), dibutyl phthalate (DBP), or benzyl butyl phthalate (BBP).”

The same directive, amending DOH A.O. 2009-0005, further prohibits the sale of“any children’s toy that can be placed in a child’s mouth that contains concentrations of more than 0.1 % by weight of diisononyl phthalate (DINP), diisodecyl phthalate (DIDP), or di-n-octyl phthalate (DnOP).

As early as 1999, the DOH through an advisory issued by the Bureau of Food and Drugs (the predecessor of the Food and Drugs Administration) warned that“phthalates may cause adverse health effects such as liver and kidney wounds, reproductive abnormalities and immune system defects.”

"For the health and wellness of Filipino children, we ask toy manufacturers, importers, distributors and retailers not to make and sell PVC children's articles and toys, and to duly label their products to assist consumers in making informed buying decisions," the EcoWaste Coalition said.

Article with Video re Phthalates in Toys Seized by Italian Police:
http://www3.nhk.or.jp/daily/english/20121120_08.html

Better avoid PVCs to prevent exposure to Phtalates. There are surely lots of toys that are Phtalate-free. I think the Government should regulate the making or importing of products that contain Phatalates. They should make it a point that no Pthalate-based product is sold in the market.
- MutualCornell.com