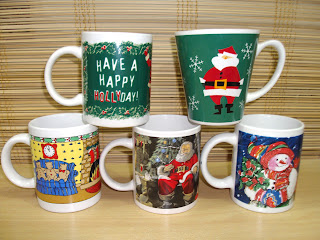 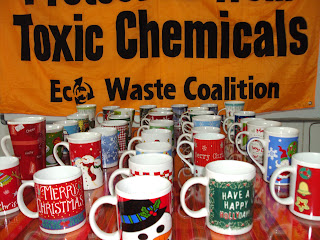 Keep out cheap coffee mugs decorated with popular Christmas symbols in your yuletide gift list unless such items are confirmed safe from lead and other chemicals of concern.

The EcoWaste Coalition presented this suggestion to gift givers after analyzing 35 samples of Christmas mugs for heavy metals such as antimony, arsenic, cadmium, chromium, lead and mercury.

“As the gift-giving season comes closer, we advise the public to be on their guard against products such as 'dirty' Christmas mugs laced with toxic chemicals that can harm people whom we care a lot,” said Thony Dizon, Coordinator of the EcoWaste Coalition’s Project Protect.
“As consumers, we have the right to seek truthful information about chemicals in products and to be protected against health hazards,” he emphasized.

The mugs had Christmas bell, candy cane, evergreen tree, gingerbread, mistletoe and holly, Santa Claus and his reindeers, snowflake, star, stocking, wreath and other symbols of the season painted on them.
Costing from P20 to P85 per piece, the mugs were purchased by the group from five bargain or discount stores, with 15 of the samples obtained from a single vendor in Villalobos St., Quiapo, Manila.

All 35 samples were found to contain one or more heavy metals above levels of concern after screening them on October 31, 2012 with a handheld X-Ray Fluorescence (XRF) chemicals analyzer.

Out of 35 samples, 29 were found to contain lead above the 90 parts per million (ppm) US limit for lead in paint.

The 29 lead-tainted samples had an average of 12,643 ppm lead, with the following as the top five:

1. A green mug with an image of Santa Claus saying “have a happy hollyday” registered with the highest level of lead among the tainted samples at 26,700 ppm. The same sample scored the highest in chromium at 13,200 ppm and arsenic at 3,875 ppm. It was also laced with 3,047 ppm cadmium and 608 ppm antimony.

2. Another green mug with Santa Claus and snowflakes ranked second in lead content with 21,100 ppm.

3. A blue mug with a Snowman wearing winter gloves, hat and scarf was third most leaded at 20,800 ppm.

4. A mug with a sitting Santa Claus having a cup of hot drink and some cookies was fourth most loaded with lead at 19,100 ppm.

5. A mug with three teddy bears on a sofa by a fireplace with some Christmas stockings hanging placed fifth in lead content with 19,100 ppm.

Studies have associated exposure to lead to serious health problems, including developmental delays, learning disabilities, behavioral problems, decreased intelligence, birth abnormalities, and damage to the brain and the central nervous system and kidneys, the EcoWaste Coalition pointed out.
Arsenic, a known human carcinogen, was detected in all 35 samples in the range of 29 ppm to 3,875 ppm.

Cadmium, a probable human carcinogen, was discovered in 31 samples in the range of 491 ppm to 5,418 ppm.

Antimony, another possible human carcinogen, was determined in 33 samples in the range of 172 ppm to 1,362 ppm.

As Christmas approaches, the EcoWaste Coalition announced its plan to conduct more analysis of common yuletide gifts in the coming weeks to assist consumers in making sound buying and giving decisions.

Really this is a great way for celebrate christmas festival.

I already bought colored plates as gifts to friends from a newly constructed mini mall in Nagtahan, Sta. Mesa. The plates are indicated to be made in China. Can I bring one sample in your office to have it checked for safety or at least refer me to a testing center for toxic substance? For your advise, please. Thank you.

Celebration Must go On in any manner the occasion always provides joy and enthusiasm. Send Rakhi to India for your dear brother on this Raksha bandhan online from Indiangiftguru with free shipping whether he is in Delhi, Mumbai, Chennai, Kolkata, Bangalore, Hyderabad or in any part of the nation.