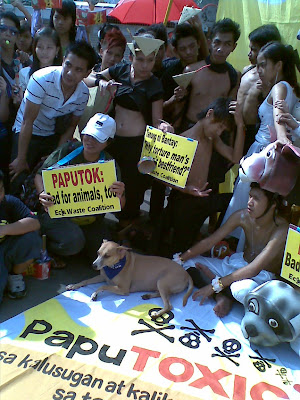 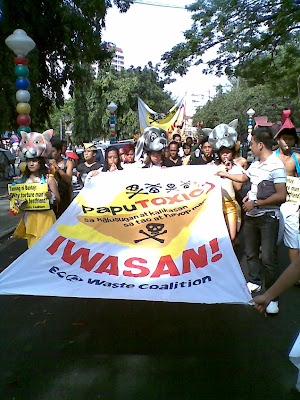 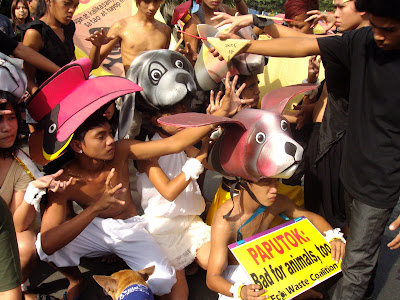 “Dogs” and “cats”, along with their human friends, peaceably assembled outside the Manila Zoo to send their message loud and clear: firecrackers and fireworks are hazardous to animal health.

Since real dogs and cats cannot speak for themselves, EcoWaste Coalition’s volunteers donning animal-like headgears drew attention to the cruel ordeal that pet and stray animals have to endure due to the massive pyrotechnics explosion to hail the New Year.

The EcoWaste Coalition, an environmental network working on waste, climate and chemical issues, is campaigning for a non-toxic New Year’s gaiety that is safe not only for humans, but for other animals and rest of the ecosystems.

Before marching through the streets of Barangay 721, Zone 78 in Malate, Manila, youth performers belonging to the Cavite-based Malikhaing Landas na Magpapayabong sa Sining at Kultura (Malaya) acted out the anguish and pain that animals such as dogs, supposedly man’s best friend, put up with during the warlike revelry.

Through dance, mime and movement, they showed how frightened animals flee in panic and go into hiding for fear of the loud bangs combined with noxious gases.

“Our New Year’s revelry is like a terrifying battlefield for cats, dogs and other animals whose ears are far more sensitive than humans. It’s like being subjected to ear-splitting acoustical torture for them,” lamented Aileen Lucero, Iwas PapuToxic Campaigner of the EcoWaste Coalition.

“We can stop this cruel aggression against our animal friends by saying no to firecrackers and fireworks,” she pleaded.

According to veterinarians, exposure to firecracker explosions can cause acoustic trauma for animals, especially for dogs and cats, because their sense of hearing is no less than 10 times more delicate than that of humans.

They can also get poisoned from eating firecracker wrappers and residues laced with harmful chemicals.

Panic resulting from firecracker explosions can cause stomach upsets or discourage animals from taking their meals.

Among those who came to express their solidarity with animals were the representatives of the Diocese of Caloocan Ecology Ministry, Global Alliance for Incinerator Alternatives, Malaya, Philippine Animal Welfare Society, Piglas Kabataan and the Rotaract Club of Rotary Club North Bay East.

To help animals cope with the unbearably loud noises from firecrackers and fireworks, the groups recommended the following tips for pet owners and other concerned citizens:

1. Appeal to family members and neighbors not to burst firecrackers.

2. Create a safe and comfortable place where your pet can hide from fumes and noises.

3. Observe where your pet goes when she is frightened and give her access to that place such as under the sofa or bed. Let your pet come and go freely to her “comfort zone.”

4. Encourage your pet to engage in an activity that diverts her attention away from startling noises and from behaving fearfully.

5. Refrain from soothing or giving treats to your pet when she is behaving frightfully as she may interpret this as a reward for her anxious behavior.

6. Don’t punish your pet for being terrified of firecrackers as this will only make her more scared.

7. Don’t try to force your dog to experience or be close to her source of fear as this can make her aggressive in her desire to escape from the situation.

8. Keep your gate closed and your perimeter secure to prevent your pet from wandering off due to panic.

To prevent pets’ exposure to toxins and other hazardous substances, the groups further suggested the following:

1. Keep hazardous materials out of reach of your pet, including plastic bags and wrappings, tobacco products, cleaning solutions, and phosphorous-containing items such as pyrotechnic devices, incense, matches and mosquito coils.

2. Keep common holiday food treats such as chocolate, grapes, macadamia nuts, popcorn, fruit cake, raisin bread and alcoholic beverages, away from your pet as these may cause stomach, kidney and liver ailments as well as choking hazard.