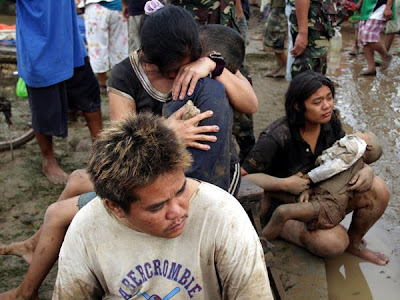 
A religious leader, a political statesman and a chemical safety activist have proposed a commonsensical way of raising funds to help the Sendong tragedy survivors in Mindanao: cancel the firework shows.

The call was made as the death toll from the tropical storm sharply rose to over 900 as more bodies were recovered by rescuers.

“I appeal to the sense of compassion of those planning to put up firework shows to drop your plans and contribute the unspent funds to help the Sendong flood victims,” suggested Bishop Iñiguez who also heads the Public Affairs Committee of the Catholic Bishops’ Conference of the Philippines.

“Such a merciful gesture will surely get heavenly rewards as this is beneficial for both the people and the environment,” he said.

For her part, Lucero stressed “it truly makes sense for every Filipino not to burn money for short-lived entertainment from dazzling firecrackers and fireworks knowing the scope and extent of the destruction caused by Sendong.”

“Cancelling the numerous pyrotechnic shows will generate substantial funds that can be put to good use, including the provision of shelter and livelihood assistance for the survivors, while at the same time preventing dangerous toxicants from aggravating the air quality,” she pointed out.

“I support without equivocation the call of the EcoWaste Colaition for the cancellation of firework shows and use the money saved for Sendong disaster relief and rehabilitation efforts,” stated ex-Senator Pimentel, a former mayor of Cagayan de Oro City that was hit hardest by ravaging flashfloods.

The EcoWaste Coalition last week launched its “Iwas PapuToxic” drive to prevent physical injuries as well as toxic pollutants associated with the use of firecrackers and fireworks to greet the New Year.

Last Friday, 17 spectators were injured when a pyrotechnic device misfired at the annual Lantern Parade in the University of the Philippines, Diliman campus, resulting to burns and wounds.

Following the Sendong tragedy, the Armed Forces of the Philippines (AFP) announced that it has scaled down the AFP Day celebration on December 21 and has canceled the use of fireworks, saving the AFP some P3 million that will be used for rescue and relief operations in affected areas.

"We hope government agencies, corporate firms and even households will take their cue from the AFP, cut down on party expenses and cancel firework shows in deference to Sendong victims and survivors," Lucero stated.

What a Lot of COWARDS !! Ban Firecrackers. Brain wash the Kids, to not like Fireworks. Shame on YOu Liberal TRASH!!