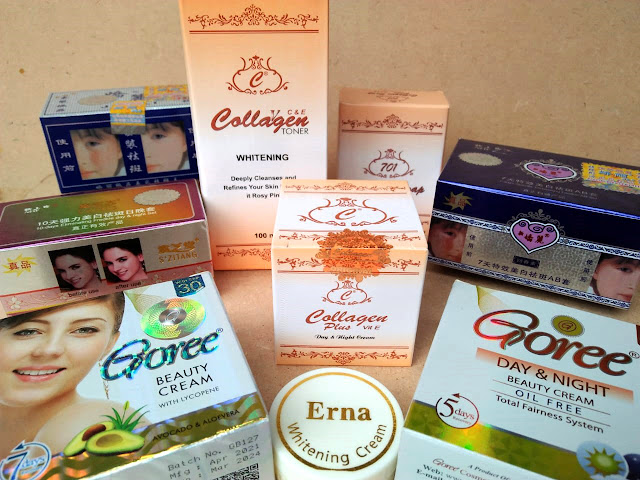 The EcoWaste Coalition, a toxics watchdog group, has urged the Quezon City government to crack down on retailers of mercury-containing skin whitening products.
In a bid to promote business compliance to Quezon City Ordinance No. 2767, series of 2018, the group wrote to Mayor Joy Belmonte today to report about the illegal trade of mercury-laced skin whiteners, which is banned under the said ordinance signed by her predecessor on November 19, 2018.
Coinciding with the third anniversary of the said ordinance, the group conducted test buys to check if skin whitening cosmetics banned by the Food and Drug Administration (FDA) for containing mercury are still offered for sale in Quezon City.
“We regret to inform your office that at least seven FDA-banned skin whitening products are openly sold in retail outlets located in various parts of the city,” wrote Thony Dizon, Chemical Safety Campaigner, EcoWaste Coalition.
“For the sake of public health, we request the Quezon City Government to crack down on the illegal sale of such products.  We specifically request the City Health Department and other concerned offices to enforce the penalty provision of Quezon City Ordinance No. 2767 to encourage business compliance to the law,” he added.
Among the forbidden products being offered for sale in Quezon City despite the national and local regulations banning them were Collagen Plus Vit E Day & Night Cream, Erna Whitening Cream, Goree Beauty Cream with Lycopene, Goree Day & Night Cream, Jiaoli 7-Days Specific Eliminating Freckle AB Set, Jiaoli Miraculous Cream, and S’Zitang 10-Days Eliminating Freckle Day & Night Set.
The group procured the banned items last Wednesday  for P100 to P230 each from one Chinese drug store in Commonwealth Market and from four beauty and herbal product stalls operating in Cubao, Fairview and Novaliches malls.
The items bought were then subjected to mercury screening using an X-Ray Fluorescence (XRF) device, which detected high concentrations of mercury above the maximum limit of one part per million (ppm), the limit set under the ASEAN Cosmetic Directive and the Minamata Convention on Mercury.
The two variants of Goree skin care products from Pakistan were found contaminated with 30,400 and 27,500 ppm of mercury, followed by Collagen Plus with 10,200 ppm.  Erna and S’Zitang contained 2,979 and  1,731 ppm of mercury, while the two Jiaoli products had 1,611 and 1,109 ppm of mercury.
Quezon City Ordinance 2767 was introduced by ex-Councilor Elizabeth A. Delarmente and subsequently co-introduced by 32 other councilors.  After a number of public hearings, the said measure was enacted by the City Council led by then Vice Mayor Joy Belmonte on October 8, 2018 and approved by former Mayor Herbert Bautista on November 19, 2018.
The EcoWaste Coalition, which is based in Quezon City, actively contributed to the passage of the said public health measure, briefing the councilors about the health and environmental effects of mercury-added skin whitening cosmetics and providing evidence as to where such products are being traded in the city.
Mercury, which is not permitted as an ingredient in cosmetics in the ASEAN region, can pose adverse health effects including skin rashes, discoloration and scarring, and reduced skin’s resistance to bacterial and mycotic skin disorders.
Health authorities have warned against direct and prolonged exposure to mercury through the skin during repeated applications, which can cause damage to the kidneys, the brain and the central nervous system.
References:
Note:
As stated in Section 6 of Quezon City Ordinance No. 2767, the following penalties await violators of the Ordinance:
Email Post