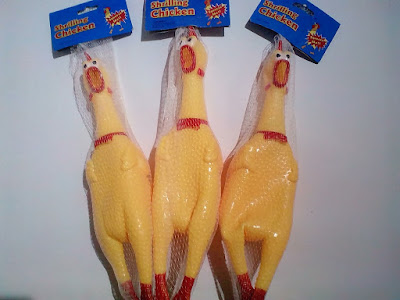 The EcoWaste Coalition, a group advocating for children’s protection from harmful chemicals, appealed to all toy manufacturers, importers, distributors and retailers to stop the sale of “Shrilling Chicken,” a plastic toy that creates a screaming sound when squeezed.

The group’s appeal came on the heels of a recent public health warning issued by the Food and Drug Administration (FDA) against the said toy, which the agency found to contain high concentrations of toxic plastic additives called phthalates.

Phthalates, which are added to make polyvinyl chloride (PVC) plastic flexible and soft, are endocrine disrupting chemicals linked to various health problems, including genital abnormalities in boys such as malformed penises and undescended testicles, and the early onset of puberty for girls, the EcoWaste Coalition said.

“We call upon all stores selling ‘Shrilling Chicken’ to heed the FDA’s advisory and cease from selling this funny but unsafe toy,” said Thony Dizon, Chemical Safety Campaigner, EcoWaste Coalition, who also recalled sending samples of such toy to private laboratories  for phthalate analysis in 2010 and 2012.  The analyzed samples were likewise found laden with banned phthalates, especially DEHP, a probable human carcinogen.

“Toxic ‘Shrilling Chicken’ has been around for over 10 years.  It’s high time for the authorities to completely rid the market of this dangerous toy,” he said.

Prior to the FDA advisory, countries in Europe have either banned or ordered the withdrawal from the market of “Shrilling Chicken” due to their toxic content, the EcoWaste Coalition pointed out.

Slovakia banned “Shrilling Chicken” in 2008, Sweden in 2013, Czech Republic in 2014, Spain in 2016 and Luxembourg in 2017, the EcoWaste Coalition said, citing information from the European Union’s rapid alert system for non-food dangerous products.

Slovakia, Czech Republic, Spain and Luxembourg took action after finding prohibited phthalates in toys such as DEHP and DINP on the plastic material of the chicken.  DEHP, in particular, “may harm the health of children, causing possible damage to the reproductive system.”

Sweden banned “Shrilling Chicken” as “the product poses an environmental risk (chemical pollution) because the plastic in the chicken contains up to 10% short chain chlorinated paraffins (SCCPs),” a class of persistent organic pollutants or POPs.

As per DOH. A.O. 2009-005 as amended in 2011, “it shall be unlawful for any person to manufacture for sale, offer for sale, distribute in commerce, or import into the country any children’s toys that contain concentrations of more than 0.1 percent by weight of di-(2-ethylhexyl) phthalate (DEHP), dibutyl phthalate (DBP), or benzyl butyl phthalate (BBP).”

The FDA has warned that “the use of substandard and possibly adulterated TCCA products may result to health risks including but not limited to endocrine disruption and reproductive or developmental effects in relation to exposure to these compounds.”