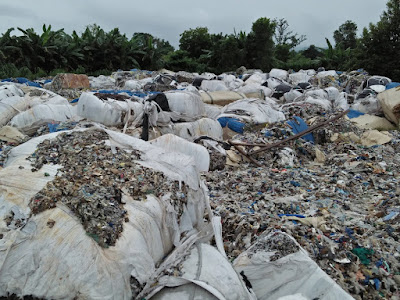 The EcoWaste Coalition, an environmental health and justice group, welcomed the probable removal next month from Tagoloan, Misamis Oriental of the remaining 5,177 tons of mixed plastic waste exports from South Korea.

The group cited the response that it received from the Embassy of the Republic of Korea indicating expected reshipment of the illegal waste exports from the affluent East Asian country in September this year.

It will be recalled that the EcoWaste Coalition wrote last August 2 to the Office of the President, the Ministry of Environment and the Embassy of South Korea to expedite the re-export of the illegal wastes that have been languishing in Tagoloan for over a year now.

In response, the South Korean government through its Embassy in Taguig City informed the EcoWaste Coalition through a letter dated August 6 that “relevant Korean authorities have been discussing the detailed procedure for the repatriation of garbage with the Philippine Bureau of Customs.”

“We will have to wait for the results of the discussion, but it seems that the waste is expected to be returned to Korea in September 2019,” the letter said.

“We welcome this important piece of information from the South Korean Embassy, which is a good indication that the overstaying wastes will be gone soon and will not suffer the same fate as the infamous garbage from Canada that sailed back to its source after six years following a diplomatic crisis,” said Aileen Lucero, National Coordinator, EcoWaste Coalition.

“We hope the vessel that will bring the illegal waste exports back to South Korea will be identified and dispatched sooner as the wastes are ready to be picked up anytime,” she added.

Mindanao Container Terminal Port Collector John Simon had earlier confirmed with the EcoWaste Coalition through a text message that the repackaged wastes are now “ready for pickup.”

“This early, we thank the governments of the Philippines and South Korea for ensuring an expedited resolution of this dumping controversy in line with the Basel Convention and for the ongoing efforts to hold those persons responsible for this illegal act accountable,” Lucero said.

The 5,177 tons of bulk wastes from South Korea, which the Philippine authorities had determined as “misdeclared, heterogenous and injurious to public health,” have been sitting since July 2018 at the compound of consignee Verde Soko Philippines Industrial Corp. inside the PHIVIDEC Industrial Estate in Sitio Buguac, Barangay Santa Cruz, Tagoloan, Misamis Oriental.

Early this year, on January 13, nearly 1,400 tons of containerized illegal mixed plastic wastes imported by the same company were sent back by customs authorities to the port of Pyeongtaek in South Korea.

To prevent the recurrence of illegal waste exports from Canada, South Korea and other countries, the EcoWaste Coalition reiterated its urgent appeal for President Rodrigo Duterte’s ratification of the Basel Ban Amendment, which prohibits the export of hazardous waste and other wastes from developed to developing countries for any reason, including recycling.

The group also affirmed its support for a complete and permanent ban on the importation of foreign wastes, citing the need to protect public health and the environment from global waste trade.