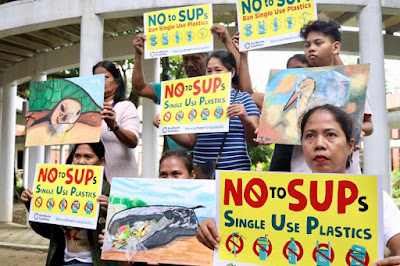 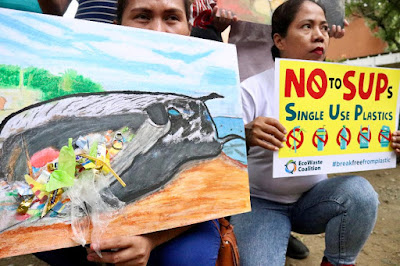 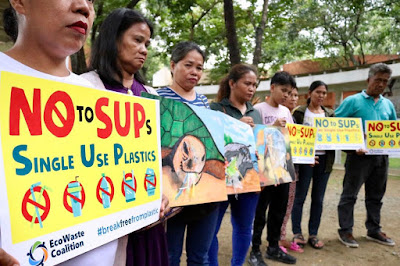 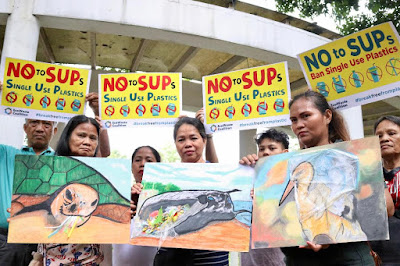 This was the reverberating call echoed by more than 100 individuals representing civil society organizations, students, as well as local governments during today’s “Plastic 101” event that drew attention to the plastic pollution crisis and the need for sustainable solutions.

The call came in response to the ever growing problems caused by SUPs.

“We are drowning in plastics and dying inch by inch from their toxic releases!,” exclaimed Jovito “Jove” Benosa, Zero Waste Program Officer of EcoWaste Coalition.

According to the Global Alliance for Incinerator Alternative (GAIA) report Plastics Exposed, each day, the country produces around “164 million pieces of sachets”, “48 million shopping bags” and “45.2 million pieces” of so called “plastic labo bag”.

“SUPs, which are designed for the dump (or for the fire), clearly have no place in an environment designed for perpetual recycling of resources that will truly promote and sustain life and health of this planet’s inhabitants,” Benosa continued.

“In view of this, the only way to deal with SUPs is to phase them all out,” he maintained.

“The law clearly singles out SUPs and similar products in its definition of non-environmentally acceptable in Section 3 (m): ‘re-usable, biodegradable or compostable, recyclable and not toxic or hazardous to the environment,’” he stressed.

According to the report “Plastic & Health: The Hidden Cost of a Plastic Planet, “…roughly two-thirds of all plastic ever produced has been released into the environment and remains there in some form—as debris in the oceans, as micro- or nanoparticles in air and agricultural soils, as microfibers in water supplies, or as microparticles in the human body.”

The report explains that once in the environment, plastics “slowly fragments into smaller particles” where they contaminate the air, water, and soil, “accumulate in food chains, and release toxic additives or concentrate additional toxic chemicals in the environment, making them bioavailable again…”

To date, two related bills have been filed before the Philippine Senate to deal with these issues on SUPs: “An Act Regulating the Use of Plastic Bags, and for Other Purposes,” filed on 1 July 2019 by Sen. Maria Lourdes Nancy S. Binay and “An Act Regulating the Manufacturing, Importation and Use of Single-Use Plastic Products, and Providing Penalties, Levies and An Incentives System for Industries, Business Enterprises and Consumers Thereof,” filed on 1 July 2019 by Francis "Kiko" N. Pangilinan.

The Plastic 101 event was organized by Break Free From Plastic (BFFP) and EcoWaste Coalition to provide a venue for stakeholders to discuss issues with SUPs. ###