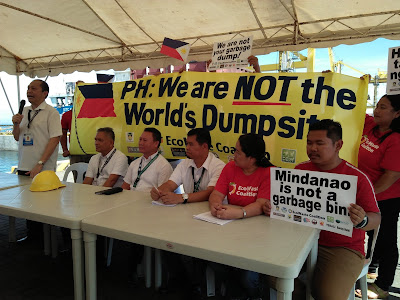 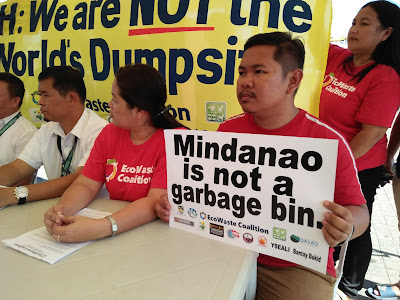 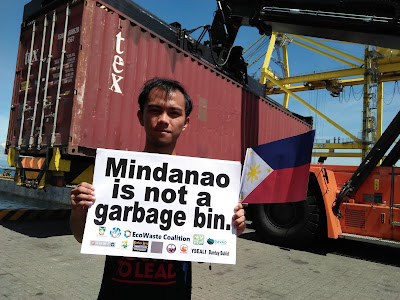 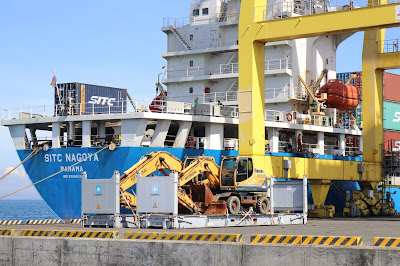 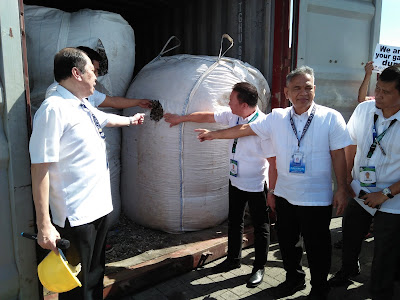 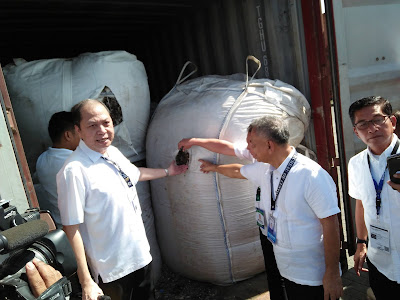 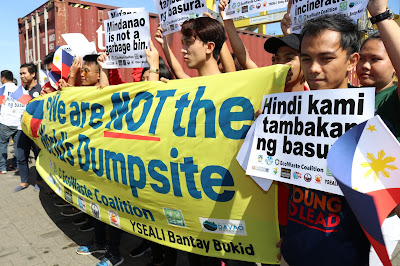 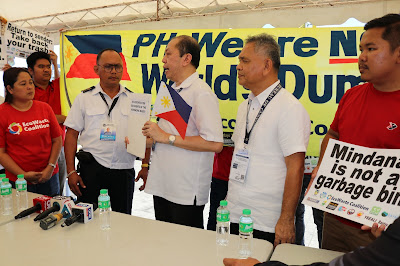 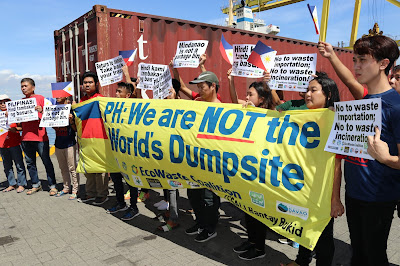 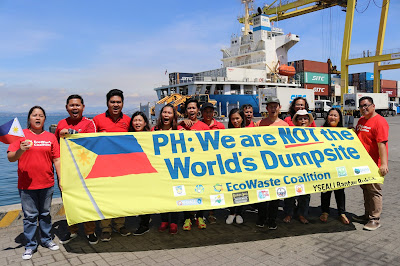 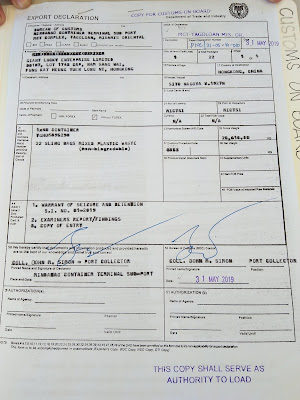 Quezon City/Tagoloan, Misamis Oriental.  The EcoWaste Coalition and its partner groups in Mindanao lambasted the entry of illegal waste shipments in the region’s ports as “totally unacceptable.”

At the send-off ceremonies for the seized mixed plastic waste shipment from Hong Kong, China, the groups asserted that “Mindanao is not a garbage bin.”  To signify their strong opposition against foreign waste dumping, the 30-member NGO delegation brandished a banner reading “PH: We are not the world’s dumpsite.”

The repatriation of the botched waste export from Hong Kong came on the heels of the long overdue departure last Friday of 69 container vans of Canadian garbage after languishing in the Philippines for six years.

This morning, Port Collector John Simon of the Mindanao Container Terminal (MCT) officiated the re-export to Hong Kong of 25,610 kilograms of mixed plastic waste packed in 22 sling bags that were wrongly declared as “assorted electronic accessories.”  The illegal traffic waste will be returned to Hong Kong via the container ship SITC Nagoya.

The re-export of the said illegal waste shipment to its source was witnessed by the representatives of the Bureau of Customs (BOC) Region 10, Environmental Management Bureau (EMB) Region 10, and civil society groups led by the EcoWaste Coalition.

“Today, we are shipping back one container van of mixed garbage consisting mostly of plastic scraps and shredded electronic parts to their source.  The export of this hazardous waste from Hong Kong in the guise of ‘assorted electronic accessories’ is illegal under the laws of Hong Kong and the Philippines and the Basel Convention,” stated Simon.

“In line with the mission of the BOC to strengthen efforts against smuggling and other customs fraud, we are returning this unlawful shipment to protect our nation’s health and the environment,” he added.

“We find it very disturbing that illegal waste cargoes are entering the country through the region’s ports.  This alarming trend is totally unacceptable and should discontinue as soon as possible.  Mindanao is not a garbage bin,” said Atty. Mark Petalver, Program Coordinator, Interface Development Interventions, Inc. (IDIS), a Davao City-based environmental NGO.

“By quickly returning the illegal waste shipment and skipping bureaucratic delay, our nation is sending a clear and unambiguous warning to waste traffickers to stop sending other countries’ wastes into our ports,” said Aileen Lucero, National Coordinator, EcoWaste Coalition. “We heaved a sigh of relief as the entry of some 70 containers of similar trash was aborted with the seizure of this test cargo.”

“The strong presence of local civil society groups in this important event indicates a growing concern among Mindanaoans against the use of the region’s ports as entry points for waste imports from overseas.  We encourage them, the local authorities and the general public to keep a close watch over illegal waste traffic in the region,” she added.

To protect Mindanao and the entire country from turning into a global dumping ground, the EcoWaste Coalition renewed its call for a comprehensive and immediate ban on waste imports and for the rapid ratification of the Basel Ban Amendment.

The Basel Ban Amendment, which has yet to enter into force, aims to prohibit the export of hazardous wastes and other wastes from developed to developing countries for any reason, including recycling. From the list of eligible countries, including the Philippines, only two more country ratifications are needed for the amendment to enter into force.

To recall, the misdeclared mixed plastic waste shipment arrived at the MCT on January 2, 2019 from Hong Kong on board SITC Fujian. It was exported by Hin Yuen Tech. Env.  Limited, consigned to Crowd Win Industrial Limited Corp., and was brokered by Yolanda Mondragon Narandan.

BOC Region 10 issued an alert order on February 18, 2019 followed by a warrant of seizure and detention on March 5, 2019  against the said shipment citing violation of Section 1400 (misdeclaration) in relation to Section 117 (lack of permit) of Republic Act 10863, or the Customs Modernization and Tariff Act.

2.  The shipment was consigned to Crowd Win Industrial Limited Corporation based in Pasay City and was brokered by Yolanda Mondragon Narandan of Cagayan de Oro City.

3.  Reporter Jigger Jerusalem checked the given address of Narandan and discovered that an eatery has occupied said place instead of a customs broker’s office.  The EcoWaste Coalition also checked the address provided by Crowd Win in Pasay City and was told by the CTC Building Administration that the firm vacated its rented unit last December 2018.

6.  Upon examination by customs officials on February 19, 2019, the shipment was found to contain “mixed plastic waste.”

7.  BOC Region 10 issued a Warrant of Seizure and Detention on March 5, 2019 for “violation of Section  Section 1400 (misdeclaration) in relation to Section 117 (lack of import permit) of RA 10863” or the Customs Modernization and Tariff Act.

8.  An inspection on the said shipment on May 22, 2017 in the presence of Port Collector John Simon and other customs officials, GMA7, and the EcoWaste Coalition found plastic scraps and shredded electronic parts.

9.  According to Port Collector John Simon, the shipment was a “test cargo.”  Had the Bureau of Customs Region 10 gave its permission, some 70 more containers loaded with the same cargo were to be shipped through the Mindanao Container Terminal sub-port.

10.  “Hong Kong Special Administrative Region commits to combating illegal transboundary movement of waste. Our laws do not allow exporting waste to overseas for dumping” (statement from the Hong Kong’s Environment Bureau and the Environmental Protection Department as reported by CNN Philippines).

11.  On June 3, 2019, the Hong Kong waste shipment will be sent back to its origin via container ship SITC Nagoya.
Email Post