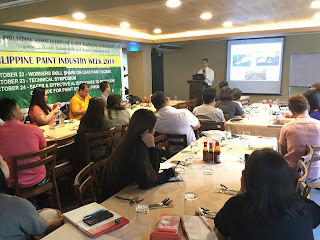 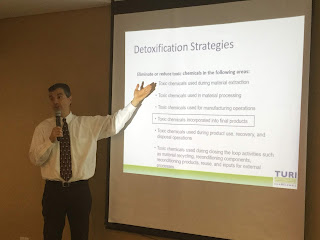 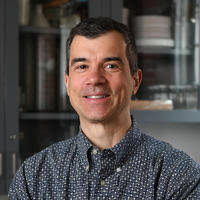 Speaking at a seminar yesterday on “Safer and Effective Alternatives for Methylene Chloride in Paint Stripping Products,” Dr. Greg Morose, Research Professor at the University of Massachusetts Lowell, drew attention to steps by the US Environmental Protection Agency (EPA) to potentially ban the extremely toxic solvent in paint strippers and the voluntary plans by retail giants in US and Canada to stop selling such products by end of 2018 or early 2019.

Methylene chloride, also known as dichloromethane, is a highly volatile compound used as solvent in paint removing products.  Because of its high volatility, poisonous fumes are unavoidable.  The major route of exposure is via inhalation, but exposure may also occur through ingestion and eye or skin contact.

The seminar, organized by the Philippine Association of Paint Manufacturers (PAPM) with the EcoWaste Coalition, coincides with the celebration of the Paint Industry Week as well as the International Lead Poisoning Prevention Week.

An analysis conducted by the Center for Public Integrity identified at least 56 accidental exposure deaths linked to methylene chloride in the United States.  The vapors from paint strippers that include methylene chloride can depress a person’s central nervous system, slow breathing and cause loss of consciousness and death, according to the US EPA.

Based on environmental, health and safety evaluation and performance testing, it is possible to design and test alternatives to methylene chloride based paint strippers that are safer, cost effective, and have equivalent performance, Morose said.

“One of the biggest roadblocks that consumers and companies have to using safer alternatives is performance. If the safer solution doesn’t work as well as the product that contains toxic chemicals, then it’s more difficult for consumers to make the switch,” he pointed out.

According to the US EPA, “effects of short-term (acute) exposures to workers and consumers, including bystanders, can result in harm to the central nervous system, or neurotoxicity. These effects include dizziness, incapacitation, and, in some cases, death. Effects of longer periods of exposure (chronic) for workers includes liver toxicity, liver cancer, and lung cancer.”

As per the agency’s website, EPA is proposing to prohibit the manufacture (including import), processing, and distribution in commerce of methylene chloride for all consumer and most types of commercial paint removal, and to prohibit commercial use.

US retail giants Home Depot, Lowe’s, and Sherwin-Williams have announced their plans to stop selling paint strippers containing methylene chloride and N-methyl-2-pyrrolidone (NMP) by December 2018, while Walmart will stop selling them by February 2019.  In neighboring Canada, major retailer Canadian Tire will phase out such paint removers by end of the year.