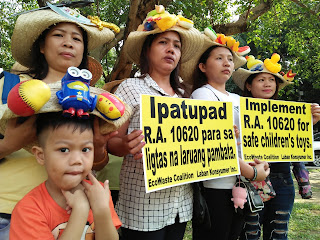 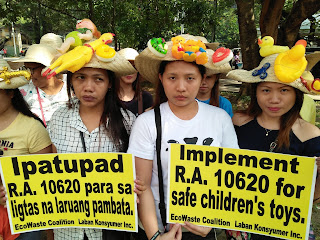 After their repeated demands for the promulgation of the Implementing Rules and Regulations (IRR) of Republic Act 10620, or the Toy and Game Safety Labeling Act, went unheeded, consumer protection and environmental health groups finally went to the court to compel the concerned agencies to act.

The EcoWaste Coalition and Laban Konsyumer Inc., joined by 20 mothers as petitioners, today filed a petition for writ of mandamus at the Quezon City Regional Trial Court to direct the Department of Trade and Industry (DTI) and the Department of Health (DOH) to immediately issue the IRR of RA 10620.

The filing coincided with the national observance of the Consumer Welfare Month this October, and the International Lead Poisoning Prevention Week on October 21 to 27.  The latter seeks to promote awareness and action to protect children from being exposed to health-damaging lead in paints, toys and other sources.

RA 10620 was enacted by the 15th Congress and signed into law by former President Benigno S. Aquino III on September 3, 2013.  Section 12 of the said law mandates the DTI, in consultation with the DOH, to promulgate its corresponding IRR.

Petitioner Rene Pineda of the EcoWaste Coalition lamented that “the inexcusable five-year delay in the issuance of the IRR has unjustly deprived consumers, particularly parents and their children, access to vital product labeling information that can help in making informed purchasing decision and prevent hasty purchases of unsafe and unsuitable toys.”

Atty. Gregorio Rafael Bueta, counsel for the petitioners, stated that “five years to issue an IRR is unacceptable and is even unheard of,” emphasizing further that the petition is meant “to aid in the enforcement of RA 10620, to promote the legislature’s will, and strengthen toy safety regulation for the best interest of children.”

The mothers who came from EcoWaste Coalition’s member groups in Quezon City endorsed the petition as the dissemination of the IRR and its strict enforcement will address a persistent problem with unregistered toys proliferating in the market.

According to the petition,  a first draft of the IRR was submitted for public consultation in April 2014, in which the EcoWaste Coalition participated and submitted comments. In May 2014, the Technical Working Group met to discuss the comments received from the said consultation and made amendments to the draft IRR.

However, from the 27 May 2014 meeting of the TWG up until the filing of this petition, no IRR has been issued.

The EcoWaste Coalition and Laban Konsyumer, Inc. have on several occasions written to both the DOH and the DTI to push for the promulgation of the IRR.  The groups have likewise aired their demands through the media to encourage the respondents to act.