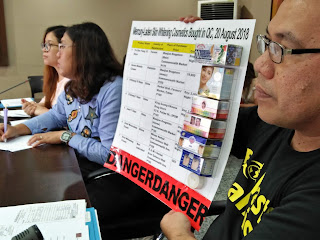 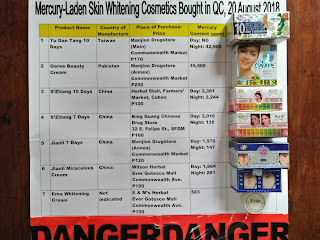 The EcoWaste Coalition, a non-profit watch group tracking toxic chemicals, products and wastes, confirmed the unabated sale of banned mercury-laden skin whitening cosmetics in Quezon City justifying a proposed ordinance that will put an end to such illegal trade.

At the hearing of the Quezon City Council’s Committee of Trade, Commerce and Industry this morning, the group informed  the councilors led by committee chair District IV Councilor Irene Belmonte that contraband skin whitening products with mercury impurities  are being offered for sale despite being banned by the Food and Drug Administration (FDA).

The group had earlier conducted test buys to mark the first anniversary of the entry into force of the Minamata Convention of Mercury that aims to, among other provisions, phase out mercury use in an array of products, including skin lightening creams and soaps, to protect public health and the environment.

“To prove our point, we went around QC last Monday and managed to buy proscribed products for P100 to P250 each that are often sold over the counter and with receipts provided.  The proposed ordinance banning and penalizing such unlawful trade is strongly justified,” stated Thony Dizon, Chemical Safety Campaigner, EcoWaste Coalition.

The banned products, according to Dizon, were obtained from stores selling cosmetics, herbal supplements, and Chinese medicines at the Araneta Center in Cubao, Ever Gotesco Mall and Commonwealth Market along Commonwealth Avenue, and a retail outlet at Barangay Damayan.

Dizon presented to the councilors the purchased skin whitening cosmetics, including two variants of Jiaoli, two types of S’Zitang, and one sample each of Erna, Goree and Yu Dan Tang – all of which are not registered with the FDA and banned for containing mercury above the trace amount limit of one part per million (ppm).

As per analysis by the group using a handheld X-Ray Fluorescence (XRF) device, the products bought are contaminated with elevated concentrations of mercury in the range of 583 to 42,000 ppm.

Mercury is a highly toxic substance with no known level of exposure that is considered safe, the EcoWaste Coalition emphasized, adding that fetuses, babies, children, and pregnant women are most susceptible to the health effects of mercury.

The Committee on Trade, Commerce and Industry unanimously approved today the Proposed Ordinance 20CC-439 entitled “An Ordinance Banning the Manufacture, Distribution, and Sale of Mercury-Containing Skin Whitening Cosmetics in Quezon City,” which the Committee on Health and Sanitation had earlier approved last August 14.

“As a group espousing a zero waste and toxics-free society, we deem it very important for national and local measures to be enacted and enforced that will reduce mercury releases to the environment.  Getting rid of mercury-added products such as skin whitening creams, for instance, is a good way to cut mercury releases to air, water and soil and thus protect human health,” Dizon said.