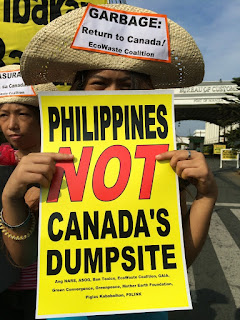 A waste and pollution watch group bewailed the non-enforcement of a court order directing the importers to return tons of illegal Canadian garbage shipments back to their origin.

“Two years have passed by since the ‘return to sender’ order from the court and the reeking residual wastes from Canada are still in our country posing health and environmental hazards.  We remain clueless as to when the defendants will comply with the court order,” said Aileen Lucero, National Coordinator, EcoWaste Coalition.

The group also pressed the Canadian government to honor their promise to solve this long-drawn-out dumping scandal.

It will be recalled that during the sidelines of the 31st ASEAN Summit last year, Canadian Prime Minister Justin Trudeau assured President Rodrigo Duterte of his government’s commitment to resolve the garbage issue, stating “it is now theoretically possible to take (their rubbish) back.”

“We have not forgotten what he said so we urge Prime Minister Trudeau to keep his promise and put right the environment injustice committed against our nation,” Lucero said.

Judge Tita Bughao Alisuag of the Manila Regional Trial Court (Branch 1) on June 30, 2016 ordered the return of the imported garbage to Canada in accordance with RA 6969, or the Toxic Substances, Hazardous and Nuclear Wastes Control Act.

The court order drew cheers among the intervenors to Criminal Case No. 14-311191 versus importer Adelfa Eduardo et al for violation of R.A. 6969.

The intervenors, which include Ang Nars Party-List, EcoWaste Coalition, Global Alliance for Incinerator Alternatives, Public Services Labor Independent Confederation, Sentro ng mga Nagkakaisa at Progresibong Manggagawa and three other individuals, interceded to stop the wastes from being disposed of in local facilities.


The court “sides with the intervenors that the disposal and destruction of the wastes will violate equally important environmental laws such as RA 9003 or the Ecological Solid Waste Management Act and RA 9275 or the Clean Water Act," the ruling said.

In 2013-2014, a total of 103 shipping containers of mostly residual garbage from Canada disguised as scrap plastics for recycling entered the Philippines.

Twenty-six of these garbage-filled containers were unlawfully disposed of in 2015 at a private landfill facility in Tarlac angering local officials and residents.