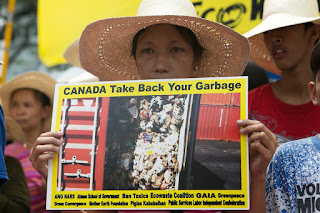 Environmental and labor groups opposed to foreign waste dumping today asked the Canadian government to reveal exactly when it will take their rotting garbage out of the Philippines.

Fearing that Canada’s promise to resolve the long-drawn-out dumping controversy will end up as an empty promise, the groups sought a clear timeline for the return of the illegal trash consignments to its origin.

The groups reiterated the need to put the garbage dumping issue to a close as the Philippine Earth Month is observed this April as per Proclamation 1482 issued on April 10, 2008.

It will be recalled that Canadian Prime Minister Justin Trudeau last November 2017 assured President Rodrigo Duterte of his government’s commitment to resolve the garbage issue, announcing at a press conference on the sidelines of the 31st ASEAN summit that “it is now theoretically possible to take (their rubbish) back.”

“Over four months have already lapsed since PM Trudeau made that pronouncement and we remain clueless as to when Canada’s garbage will be finally shipped out.  As this is a matter of national concern and pride, it is only just and proper for us, the people, to demand transparency from the authorities as to what is being done to settle the problem,” said Josua Mata, Secretary General, Sentro ng mga Nagkakaisa at Progresibong Manggagawa (SENTRO).

“We hope Canada is not purposely keeping our people in the dark about its efforts to rectify this festering environmental justice issue.  PM Trudeau can quickly erase any suspicion by publicly disclosing  his government's plan and timetable for re-importing Canada's garbage, which they cannot delay any further.  We have the right to know and to expect PM Trudeau to honor what he said he would do," said Aileen Lucero, National Coordinator, EcoWaste Coalition.


The EcoWaste Coalition and SENTRO are among the intervenors in Criminal Case No. 143-11191 against the Canadian trash importer Adelfa Eduardo and customs broker Sherjun Saldon for violation of R.A. 6969, or the Toxic Substances and Hazardous and Nuclear Wastes Control Act, that is being heard by Judge Tita Bughao-Alisuag of Manila  Regional Trial Court, Branch 1.

In 2013-2014, a total of 103 shipping containers of mostly residual garbage from Canada disguised as scrap plastics for recycling entered the Philippines.  Twenty-six of these garbage-filled containers were unlawfully disposed of in 2015 at a privately-run landfill facility in Tarlac.

On November 22, 2017, the Subic Bay Metropolitan Authority sought the urgent removal of the remaining containers of Canadian trash from Subic port as the stench has become “unbearable” and posed “health hazards.”

Few days later, Senate President Koko Pimentel on December 4 proposed a legislative inquiry “to determine whether there are sufficient laws restricting the indiscriminate entry and dumping of solid waste and other forms of harmful trash into the Philippines,” citing “the monumental consequences of allowing Canadian garbage to remain in the country.”

On January 26, participants of the 2018 Zero Waste Conference organized by the EcoWaste Coalition wrote to PM Trudeau to remind him to keep his promise.

“Nothing could bridle the anger and frustration (over the dumping issue) until the illegal trash shipments are finally sent back for environmentally-sound disposal in Canada,” the conference participants pointed out through an e-mail sent to PM Trudeau.