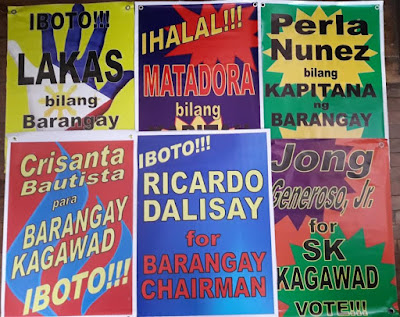 A waste and pollution watch group urged candidates for the upcoming Barangay and Sangguniang Kabataan polls to go easy on tarpaulin posters laced with cadmium, a cancer-causing chemical.

The EcoWaste Coalition issued the toxic alert amid the frenzy as the start of the official nine-day campaign period starts on May 4.

"Tarpaulins such as those made of polyvinyl chloride (PVC) plastic often contain cadmium, a chemical that is deemed extremely harmful to human health and the environment,” said Thony Dizon, Chemical Safety Campaigner, EcoWaste Coalition.

As the campaign period is limited to nine days and will only cover a small geographical area, the EcoWaste Coalition encouraged Barangay and SK candidates not to focus their resources on the quantity of tarpaulins and other campaign materials to be made and disseminated.

“Voters will surely remember candidates who have taken the trouble of visiting their homes and neighborhoods not only to shake hands but, more importantly, to chat with them about their concerns and how the Barangay and the SK could be of assistance to their lives,” Dizon said.

To draw attention to this health and environmental threat, the EcoWaste Coalition had 10 new campaign tarpaulins done by different signage makers in Caloocan, Quezon ang Taguig Cities.  The tarpaulins, measuring 18 x 24 inches and costing P36 to P150 each, carried the names of popular teleserye characters as Barangay and SK candidates.

The group subjected each tarpaulin to chemical analysis using an X-Ray Fluorescence (XRF) device to determine if the material contains cadmium, which is used as stabilizer or coloring agent in PVC plastic.

The tarpaulins of the following supposed candidates were found to contain the highest concentrations of cadmium:

“We are concerned that cadmium-containing tarpaulins are adding to the growing toxicity of the waste stream that our society generates,” Dizon said.

"The PVC plastic scraps from signage makers, as well as the used tarpaulins, are disposed of like ordinary trash and hauled to dumpsites and landfills for disposal where their cadmium and other chemical additives can be released as the materials degrade,” he explained.

“These chlorinated materials may also end up being burned in dumps, cement kilns and incinerators triggering the formation and release of even more toxic pollutants such as dioxins and furans,” he pointed out.

“Perhaps it’s high time for government regulators to adopt a chemical control order for cadmium so as to reduce, if not eliminate,  their use in the production of plastic and other materials and lessen their health and environmental impacts,” he added.

Cadmium belongs to the list of priority chemicals determined by the Department of Environment and Natural Resources – Environmental Management Bureau (DENR-EMB) “to potentially cause unreasonable risk to public health, workplace, and the environment.”

The World Health Organization (WHO) also considers cadmium, along with arsenic, asbestos, lead and mercury, among the “ten chemicals of major public health concern.”

Cadmium, according to WHO, “exerts toxic effects on the kidney, the skeletal and the respiratory systems, and is classified as a human carcinogen.”

Note: European Commission Regulation No. 494/2011 prohibits manufacturers from placing mixtures and articles produced from plastic material containing cadmium “equal to or greater than 0.01 % by weight,” or 100 ppm.
Posted by EcoWaste Coalition at Saturday, April 28, 2018