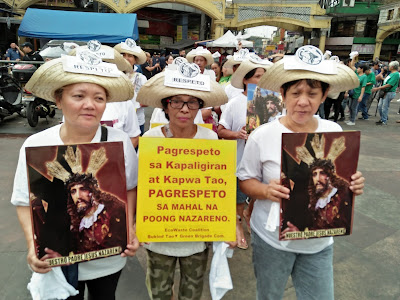 Ahead of the annual "Traslacion" of the venerated image of the Black Nazarene starting at the Quirino Grandstand in Rizal Park next Tuesday, a waste and pollution watch group appealed to devout followers to keep the iconic park clean and garbage-free.

Fearing a repeat of the heaps of garbage left by New Year revelers at   last Monday, the EcoWaste Coalition renewed its plea for visitors to treat ’s “” with utmost respect and care, reiterating that the park is a no smoking and no littering zone.

The traditional “Pahalik” (kissing of the image), overnight vigil and  Eucharistic Celebration at the Quirino Grandstand prior to the mammoth procession on January 9 are expected to draw hundreds of thousands of devotees.

“As a show of reverence to the Black Nazarene, we request the faithful to manifest their solemn devotion in a way that will not overwhelm and the processional route with litter,” said Daniel Alejandre, Zero Waste Campaigner, EcoWaste Coalition.

“Cleaning up the mess left behind by the devotees can be a grueling task for government workers and for volunteers from various parishes, schools and groups.  We therefore ask everyone to be considerate, mind your own discards, and assume full responsibility for their ecological management and disposal,” he said.

“Please set a good example in environmental stewardship that can inspire others to follow,” Alejandre appealed to the Black Nazarene devotees.

Among the most littered items in the past commemorations of the Traslacion include single-use beverage and food packaging such as polystyrene cups and meal containers, food leftovers, bamboo skewers, PET Bottles, plastic bags, used newspapers, and cigarette filters.

The group also requested the devotees not to relieve themselves in the open, noting that urinating on the walls of , in the streets and even in PET bottles and plastic bags is unsightly and unsanitary.

Last year, the group found urine-containing PET bottles left by some devotees who spent the night at .

“The protection and preservation of  and the city ‘s environment must also be at the core of our devotion to the Black Nazarene,” the EcoWaste Coalition said.

Devotees, the group said, can start by choosing not to litter, smoke, spit and urinate in public, and by influencing others to care for all God’s creation as well.