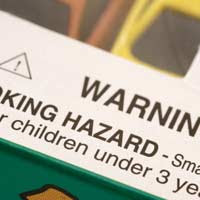 Two public interest consumer groups today pressed for the immediate issuance of the Implementing Rules and Regulations (IRR) for a landmark toy and game safety labeling law enacted in 2013.

In a joint press statement, the EcoWaste Coalition and the Laban Konsyumer, Inc. emphasized the need to enforce Republic Act 10620, or the Toy and Game Safety Labeling Act of 2013, by promulgating its Implementing Rules and Regulations without further delay.

“The Department of Trade and Industry (DTI), in consultation with the Department of Health (DOH), duly completed the IRR for R.A. 10620 some time in 2015, which was subsequently submitted to the respective department secretaries for approval.  With the yuletide season upon us, we hope that the authorities would fast track its promulgation for the sake of our children’s safety and well-being,” said Atty. Victor Dimagiba, former DTI Undersecretary and President of Laban Konsyumer, Inc.

“The continued proliferation of misbranded and mislabeled toys in the market, including those that contain undisclosed hazardous chemicals, justifies the immediate issuance of R.A. 10620’s IRR.  Its promulgation will be an excellent Christmas gift that the Duterte administration can give to all children across the country,” stated Thony Dizon, Coordinator of the EcoWaste Coalition’s Project Protect.

“The enforcement of the general and specific labeling requirements for toys and games manufactured, imported, exported, donated, distributed and sold in the country will go a long way in protecting our children against unsafe toys that can harm their minds and bodies,” he added.

According to Section 2 of R.A. 10620, “the State recognizes that children, by reason of their physical and mental immaturity, need special safeguard and care. The State acknowledges its obligation to secure the right of children to proper care and special protection from all forms of neglect and other conditions prejudicial to their development.”

The law requires the DTI to regularly publish every six months, the list of all manufacturers, importers, distributors and retailers who failed to comply with the requirements of R.A. 10620.

Likewise, the law requires the DOH to publish every six months, the list of all misbranded or banned hazardous substances the sale, offer for sale and distribution of which shall not be allowed under R.A. 10620.