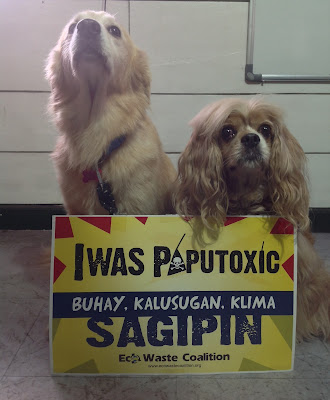 Their plea to all citizens regardless of economic or social status: Usher in the New Year sans deafening explosion and toxic pollution from firecrackers that could harm not only homo sapiens, but other animals, too.

Speaking with one voice, the Animal Kingdom Foundation, Compassion and Responsibility for Animals (CARA Welfare Philippines), Combined Animal Rescue Endeavor (CARE), Philippine Animal Welfare Society (PAWS) and the EcoWaste Coalition expressed optimism that families, especially households that have dogs, cats and other pets, would heed their plea and steer clear of firecrackers.


“It is common knowledge that animals, particularly cats and dogs, are easily terrified of loud bangs from firecrackers.  Because of their acute sense of hearing, what is loud to us, humans, is deafening to them.  With the warlike detonation of firecrackers, it is not hard to imagine the terror that our furry friends have to go through, especially on New Year’s eve.  They tremble with fear while we enjoy the boisterous festivity,” said Anna Cabrera, Executive Director of PAWS, a group that seeks “to prevent cruelty, alleviate paint, fear and suffering in animals.”

“New Year is sadly a very stressful time for our pets,” observed educator Eric Suguitan, a speaker for CARA Welfare Philippines, which envisions “an animal compassionate country where all cats and dogs have good homes.”  “Besides the ear-piercing noise pollution, bursting firecrackers can make them very nervous.  Canine and feline anxiety to flashing lights and loud noises can lead to loss of appetite, stomach upset and decreased sense of direction.”

“Igniting firecrackers supposedly to drive away bad luck, by all indications, is cruel and traumatic to animals.  This horrific ordeal is not the way to reward dogs -- affectionately called as man’s best friend -- cats and other pets,” said Atty. Heidi Caguioa, legal counsel of AKF, which is in the forefront of the campaign against dog meat trade.

CARE for its part is calling on local governments to pass ordinances banning fireworks in order to prevent deaths and injuries and to protect the health of humans and animals. Merci Ferrer, spokesperson for CARE, noted that “the physical and psychological harm is not only inflicted on humans and their animal companions but also for many stray dogs and cats that require our urgent attention, as well as wildlife.”

“The pain inflicted on animals due to the firecracker craze is real and warrants greater attention,” noted Aileen Lucero, National Coordinator of the EcoWaste Coalition.   “Firecracker-related human injuries and deaths are monitored and reported every year, but seldom do we hear about the plight of animal victims. It is time to know and unravel the facts.  How many dogs and cats suffered from temporary or permanent hearing difficulties due to firecrackers?  How many got injured or killed?  How many have gone astray and were reported as missing?,”  she added.

AKF, CARA Welfare Philippines, CARE, PAWS and the EcoWaste Coalition believed that the adverse impact of firecrackers to the health and safety of animals provides another compelling reason why tougher regulations should be enforced to curb the senseless firecracker-related damage to life, limb, property and the environment at large.

On December 28, the groups will stage an advocacy parade to reiterate their plea against the detonation of firecrackers and other pyrotechnic devices for the sake of animals, including homo sapiens.