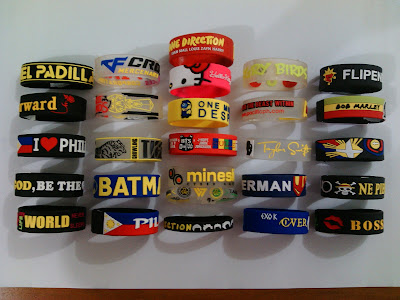 The EcoWaste Coalition, a toxics watchdog, urged political aspirants to think twice before ordering baller bands as giveaways for the upcoming national and local polls in 2016.

The group issued the precautionary warning after finding lead, a toxic chemical, in mostly polyvinyl chloride (PVC) rubber baller wristbands that it bought from Divisoria retailers for P10 per piece.

Using a portable X-Ray Fluorescence analyzer, the group detected lead in 27 out of 30 samples of baller bands in the range of 1,325 to 8,465 parts per million (ppm) of which 15 had lead content above 4,000 ppm.  Lead was not detected in the other 3 non-PVC baller bands.

“Made-to-order baller bands are popular campaign giveaways.  Sadly, not all baller bands are equal as there are types that contain harmful chemicals,” said Thony Dizon, Coordinator of the EcoWaste Coalition’s Project Protect.

Dizon zeroed in on PVC baller bands laden with lead, a heavy metal, which according to the World Health Organization (WHO)” is a cumulative toxicant that affects multiple body systems and is particularly harmful to young children.”

“While not originally intended for kids, these wrist accessories may end up in children’s hands and mouths and directly expose them to lead, a hazardous substance that attacks the brain and the central nervous system,” he said.

WHO has warned that “there is  no known level of lead exposure that is considered safe.”

Aside from lead, PVC baller bands may contain other dangerous chemical additives such as phthalates that are added to the material to give it some useful properties, including elasticity and malleability.

To avoid giving away toxic campaign souvenirs, the EcoWaste Coalition advised candidates, political parties and party-list groups to obtain certificate of analysis from vendors to confirm the non-presence of lead and other chemicals of concerns not only in baller bands, but in all other campaign materials.

“In this manner, political aspirants avoid spending for campaign stuff that can poison human health and harm the environment,” Dizon said.

The careful selection of campaign materials to buy, show or give will benefit the public health and the environment as this will:

a. prevent chemicals of major public health concern from being introduced to the market and the environment;