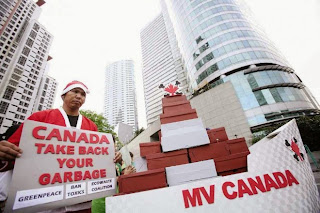 An environmental coalition for zero waste and a toxics-free society today appealed to President Benigno Aquino III to seek no less than the immediate return of 50 container vans of mixed garbage shipment from Canada when he meets Prime Minister Stephen Harper next week.

President Aquino will depart for Canada on Tuesday for a state visit on May 7-9 that according to Prime Minister Harper’s official website “will provide an opportunity for both leaders to reaffirm close relationship between Canada and the Philippines based on strong people-to-people ties.”

“We urge President Aquino to seek a just closure for the garbage dumping controversy that has remained unresolved almost two years since the first batch of the mixed trash shipment arrived in Manila in June 2013,” said Aileen Lucero, Coordinator of the EcoWaste Coalition.

Aquino should exhaust his diplomatic skills to seek Harper’s commitment to have the garbage shipment repatriated to its port of origin with immediate effect, stressing that the dumping hullabaloo is “a blatant case of environmental injustice” and not a mere “private commercial matter,” the group said.

“As Canada’s sixth-largest trading partner in Southeast Asia, a priority market and a country of focus for its international development efforts, President Aquino should have no trouble getting Prime Minister Harper’s ear,” Lucero said.

“We expect the President to clinch a ‘return to sender’ agreement with his counterpart and put the controversy to a close. Our people will rail against any move to have Canada’s garbage disposed of in local landfills, cement kilns or waste-to-energy incinerators and pollute host communities. Hindi tayo tambakan at sunugan ng basura,” she said.

“This is one agreement that should be on Aquino’s priority list, a tangible indicator by which the success of his trip will be judged by his bosses – the Filipino people,” she said.

“When he returns and reports back to the nation, we want our President to announce with dignity and pride that Canada has finally listened to our plea and has agreed to take back their garbage,” she continued.

“We want him to shout at the top of his lungs that our country is not a dumping ground for garbage and that we have the shared responsibility to keep our environment safe from all wastes and toxics, locally produced or illegally imported,” she added.

Various environmental and public health groups have insisted that the garbage shipment contravenes the “Basel Convention on the Transboundary Movement of Hazardous Wastes and Their Disposal” to which both Canada and the Philippines are parties to, as well as Republic Act 9003, the Ecological Solid Waste Management Act and other laws.

The 50 container vans of mixed garbage arrived in batches starting June 2013 and subsequently intercepted by the Bureau of Customs then headed by recently resigned Commissioner John Sevilla.

In February 2014, smuggling charges were filed against the importer Chronic Plastic and the company’s licensed customs brokers for violations of Republic Act 6969, the Toxic Substances and Hazardous and Nuclear Wastes Control Act of 1990, the Revised Penal Code and the Tariff and Customs Code.

The garbage dumping controversy has since then elicited protest actions outside the Canadian Embassy, and the Department of Environment and Natural Resources, and even on the cyberspace with an online petition on change.org attracting over 25,000 signatories, including thousands of Canadian signers.

Buddy Boyd of Zero Waste Canada stated: “This is a disgrace. Canada, once an environmental leader, has abandoned this path in favor of cheap disposal, for higher profits. We as people of Canada are deeply embarrassed at how our government's policies here have caused such bad behavior towards the environment and the good people of the Philippines.”

Fe de Leon of the Canadian Environmental Law Association (CELA) through a letter sent to the EcoWaste Coalition, said: “The time has now lapsed and Canada has a duty to intervene for the immediate return of waste shipment to Canada for proper disposal through environmentally sound management."

“To put an end to this deceitful and unethical waste dumping that has become a routine practice across the globe, we urge the Governments of both Canada and the Philippines to ratify the Basel Ban Amendment, which prohibits hazardous waste transfer from developed to developing countries even for recycling,” they said.

“Countries and companies engaged in the trade of recyclables must ensure that only clean materials are sent abroad for recycling, and that recycling is not used as a camouflage for hazardous waste disposal and dumping,” they pointed out.