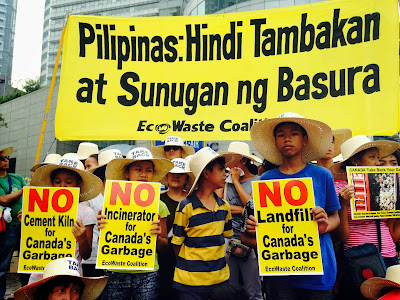 The presidential confirmation that the controversial hazardous mixed garbage from Canada will be incinerated in the Philippines drew immediate condemnation from the country’s advocates for clean air and zero waste.

President Benigno S. Aquino III last Saturday told reporters on board Philippine Airlines that the 50 container vans of wastes, “considered hazardous” as stated by the president, will be disposed of through incineration as soon as a court order has been secured.

“What a total let down!  The people’s plea for Mr. Aquino to stand up for our sovereign right not to be treated as a dumping ground fell on deaf ears with the president himself giving the thumbs up for Canada’s unlawful garbage exports to be incinerated if so directed by the court.  It’s a bizarre stance coming from a country with a gargantuan garbage problem to deal with and we deplore it,” stated Aileen Lucero, Coordinator of the EcoWaste Coalition, which is steadfastly pushing for the enforcement of the Clean Air Act and the Ecological Solid Waste Management Act.
Last week, environmental, labor, community and church leaders issued a barrage of statements urging Aquino to use the State Visit to secure Canada’s commitment to re-import their garbage and not to allow for their disposal in local landfills, incinerators or cement kilns.

Among those who have spoken was Bishop Broderick Pabillo, Chairperson of the Public Affairs Committee of the Catholic Bishops Conference of the Philippines, who said “no community deserves to be a dumping ground for wastes and toxics.”

Instead of getting Prime Minister Stephen Harper’s nod to abide by his government’s responsibility to re-import the illegal waste shipment of mixed plastics, e-wastes and residual rubbish, including adult diapers, President Aquino chose to kowtow to Canada’s pressure to have their  trash disposed of locally, environmentalists lamented.

“Is this the trade-off our people have to pay for Canada’s investment pledges resulting from Aquino’s state visit?  Is this how spineless our leaders have become that they can easily forget about our national dignity and well-being and succumb to Canada’s pressure in exchange for more investments?,” asked Lucero.

“Already, conceding to Canada’s disregard of international and local laws manifests P-Noy’s inferior mentality but to suggest that Canada’s waste be sent to burn in cement kilns for ‘treatment’ indicates this administration’s absence of care for our clean air and ecological solid waste management laws.   This is truly unacceptable,” said Paeng Lopez, Campaigner, Global Alliance for Incinerator Alternatives (GAIA).

“No community deserves the kind of toxic emissions it will be exposed to once these wastes are burned in cement kilns that are not subjected to statutory emissions standards that waste incinerators all over the world keep failing.  Reading between the lines the message we get from P-Noy is clear: we are subservient to Canada so much so that we are willing to do it at the expense of our own health,” he added.

Last November 2014, the Department of Justice said the controversial garbage shipment "falls squarely within the prohibited prohibitions" under RA 6969, the “Toxic Substances and Hazardous and Nuclear Wastes Control Act of 1990,” and DENR Administrative Order No. 28, Series of 1994, the “Interim Guidelines for the Importation of Recyclable Materials Containing Hazardous Substances.”

Ang Nars Party-List, Ateneo School of Government, Ban Toxics, EcoWaste Coalition, Global Alliance for Incinerator Alternatives, Green Convergence, Greenpeace, Mother Earth Foundation and other organizations have insisted that Canada’s garbage shipment is in breach of R.A. 6969 and the “Basel Convention on the Transboundary Movements of Hazardous Waste and Their Disposal.”