Toxic Kiddie Chairs Banned in US and Europe Sold in PH 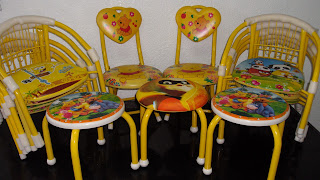 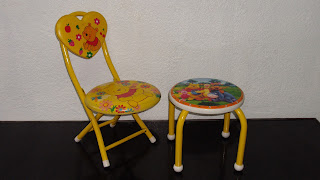 Philippines: Kiddie folding chair and stool similar to those recalled in the US. 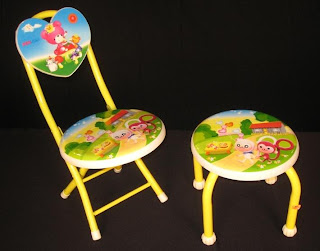 USA: Recalled kiddie folding chair and stool as published in the US CPSC website. 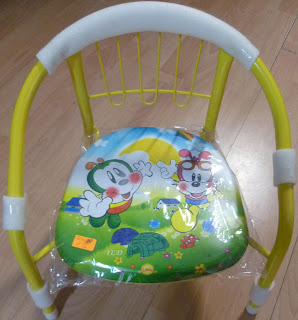 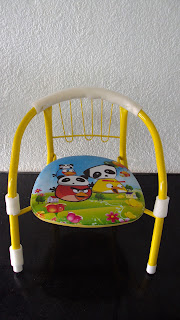 Philippines: Kiddie play chair with backrest similar to those recalled in Bulgaria.

Toxic children’s play chairs embellished with cartoon figures are enjoying brisk sales in Divisoria, the budget shoppers’ paradise, despite being recalled in US and Europe for violating chemical safety standards.

The EcoWaste Coalition, a toxics watchdog, revealed that it has found unlabeled play chairs closely resembling those recalled by the governments of US and Bulgaria on sale for P90 to P160 each at 11/88 Shopping Mall, 168 Shopping Mall, 999 Shopping Mall, Lucky Chinatown Mall and adjacent discount stores in Divisoria.

“Our AlerToxic Patrol disguised as ordinary bargain hunter took photos of the kiddie chairs in question and even bought some samples for better comparison with those banned in other countries,” said Thony Dizon, Coordinator of the EcoWaste Coalition’s Project Protect.

“The kiddie chairs withdrawn from Bulgaria and US markets and those on sale in Divisoria are almost exactly alike and just as toxic as confirmed by means of scientific analysis,” he stated.

“For the protection of children who are prone to lead exposure, we ask our health authorities to order the immediate recall of these toy products. Philippines is not a dumpsite for toys rejected in other countries on safety grounds,” he emphasized.

“If these play chairs were deemed unsafe for American and Bulgarian children to use, they are, beyond question, unsafe for Filipino children, too,” he pointed out.

The EcoWaste Coalition had already notified the government through the Food and Drugs Administration, the agency in charge of regulating children’s toys, about its findings.

According to the group, the chairs’ metal tube frames coated with leaded paint will, over time, age, wear out, flake and gather in the indoor dust and outside soils, which are then swallowed by children through their usual hand to mouth activities, thus increasing the risk of exposure.

Based on the analysis made by the EcoWaste Coalition using a portable X-Ray Fluorescence (XRF) spectrometer, children’s folding chairs and stools, which were similar to those recalled in US, had 14,100 parts per million (ppm) and 13,100 ppm of lead, respectively, on their yellow painted metal tube frames.

The group had earlier sent samples of children’s chairs akin to those recalled in Bulgaria to Intertek, a government accredited laboratory, for analysis using atomic absorption spectrometry that detected lead up to 20,680 ppm in 7 out of 9 samples.

In January 2012, the U.S. Consumer Product Safety Commission announced a voluntary recall of some 1,600 children’s folding chairs and 1,300 stools imported from China which were found to contain excessive levels of lead above the federal limit of 90 ppm.

As reported in November 2011 by the European Union’s Rapid Alert System (RAPEX) for non-food dangerous products, Bulgaria recalled Chinese-made children’s chairs with backrest, which produces sounds when the child sits on it, for posing a chemical risk due to lead and the presence of 25.75% of diethylhexyl phthalate (DEHP), a toxic additive to polyvinyl chloride plastic that the Department of Health in December 2011 banned in children’s toys in concentrations above 1% by weight.

Lead is classified as among the “ten chemicals of major public health concern” by the World Health Organization (WHO).

“At high levels of acute exposure, lead attacks the brain and central nervous system to cause coma, convulsions and even death. Children who survive acute lead poisoning are typically left with grossly obvious mental retardation and behavioural disruption,” according to the WHO-published booklet on “Childhood Lead Poisoning.”

“At lower levels of exposure that cause no obvious symptoms and that previously were considered safe, lead is now known to produce a spectrum of injury that causes loss of cognition, shortening of attention span, alteration of behaviour, dyslexia, attention deficit disorder, hypertension, renal impairment, immunotoxicity and toxicity to the reproductive organs,” WHO said.

“For the most part, these effects are permanent. They are irreversible and untreatable by modern medicine,” WHO warned.