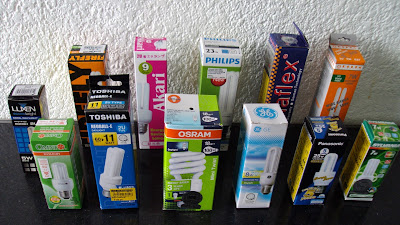 In a common letter sent to the Departments of Trade and Industry, Energy and Environment and Natural Resources, the EcoWaste Coalition and 17 other groups insisted that such lamps must have “Contains Mercury” disclosure on product labels.

“Consumers have the right to know that fluorescent lamps and other kinds of lamps contain mercury and should be handled with extreme caution, from the point of purchase to disposal, to avoid breakage and release of mercury vapor,” said Thony Dizon, Coordinator of the EcoWaste Coalition’s Project Protect.

Mercury is a potent neurotoxin of special concern for the brain development in unborn and growing children, and also for consumers or workers, particularly waste handlers and informal recyclers, who may be exposed to mercury vapor from broken or crushed lamps, Dizon said.

Based on a recent market monitoring conducted by the EcoWaste Coalition, all the 12 brands of CFLs that it bought from major supermarkets and hardware stores contain no mercury warning labels, and none provided information about the amount of mercury each product contains.

Citing  R.A. 7394’s Article 91, the groups said that a product containing hazardous substances is   deemed mislabeled if it fails to state conspicuously the common name of the chemical contributing to its harmfulness and the signal word “warning” or “caution.”

The said law further requires “a clear statement as to the possible injury it may cause if used improperly,” “precautionary measures describing the action to be followed or avoided,” “instructions for handling and storage,” and the words “keep out of reach of children,” among other requirements.

Aside from the health and safety considerations, specifying the mercury content on the packaging and the lamp itself will facilitate proper identification and inventory of certain CFLs to be phased out by 2020 under the Minamata Convention on Mercury to be signed in October 2013, the groups said.

Under the Mercury Treaty, the manufacture, import or export  of CFLs equal to or less than 30 watts with more than 5 mg of mercury per bulb shall not be allowed by 2020.

In the case study on CFLs prepared by the EcoWaste Coalition and included in the UNEP 2011 “Study on the Possible Effects on Human Health and the Environment in Asia and the Pacific of the Trade of Products Containing Lead, Cadmium and Mercury,” the group put forward several recommendations to safeguard the public health and the environment from mismanaged CFLs that often end up in waste heaps, bins and dumps.

Among their recommendations to the government were the following:

1. Adopt and enforce a deliberate policy to allow only the importation, distribution, sale and use of low-mercury CFLs and with proper labeling.

2. Reiterate the legal classification of spent CFLs as “special waste” that should be appropriately treated as hazardous waste in an environmentally-sound manner, and not simply dispose of in dumps or landfills along with residual trash.

3. Introduce Extended Producer Responsibility policy or a mandatory take-back scheme that will make manufacturers, importers, retailers or distributors responsible for the management of CFLs after their useful lives.