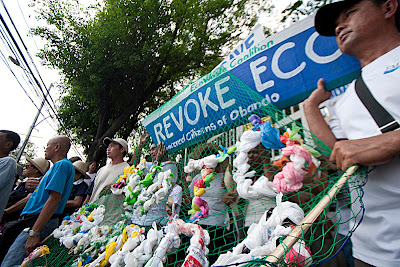 Concerned groups welcomed a decision by the Supreme Court that they hope would eventually “bury with finality” a controversial landfill project in the town of Obando, province of Bulacan.

The Supreme Court en banc issued on February 21, 2012 the writ of kalikasan in response to a petition filed by the Concerned Citizens of Obando to halt the construction of a garbage disposal facility at the fishing village of Salambao off Manila Bay.

The notice signed by Atty. Enriqueta Vidal, Clerk of Court, also referred the case to the Court of Appeals “for hearing, reception of evidence and rendition of judgment.”

In a common statement, the Concerned Citizens of Obando, the Upholding Life And Nature (ULAN) and the EcoWaste Coalition hailed the issuance of the writ of kalikasan as a step towards environmental justice.

“We thank God that the High Court granted us with a legal remedy, which we hope would, in due course, bury the contentious landfill project with finality,” said Maria Teresa Bondoc, one of the petitioners.

Lawyer Ronaldo Gutierrez, counsel for petitioners from ULAN, lauded the efforts of the concerned residents of Obando to protect the environment and the cultural heritage not just of their hometown, but all the communities surrounding Manila Bay as well.

“The proponents never fully disclosed that they will be transporting by barge a thousand metric tons of garbage per day from Pier 18 to Obando for the next 6 to 10 years. They will then dump it along the banks of Manila Bay, protected by a retaining wall that is prone to storm surges, built on inherently weak foundation and on an area near an active fault. From every angle, it's a garbage disaster just waiting to happen,” he commented.

“We hope through the writ of kalikasan, the government agencies will no longer turn a blind eye to these huge risks and stop this pretense that the landfill will help clean-up Manila Bay in accordance with the continuing mandamus issued by the Supreme Court in the MMDA case. It will not. It's an end-of-pipe solution that actually puts the garbage of Metro Manila right at the very banks of Manila Bay. How crazy is that?” he added.

For his part, Atty. Armand Mejia, counsel for the EcoWaste Coalition, said: “We hope that the wheels of environmental justice will move swiftly leading to a permanent ban on all landfill operations and ventures around Manila Bay."

The EcoWaste Coalition during its General Assembly last January 31, 2012 resolved to “support the citizens’ campaign to block the Obando landfill project and resist other existing or planned landfill projects in the Manila Bay corridor and region.”

The so-called “sanitary” landfill, a flagship project of the Ecoshield Development Corporation led by businessman Antonio L. Cabangon Chua, to be erected on a 45-hectare former fishpond is determinedly opposed by residents, civic and religious organizations and environmental health and justice groups.

Bondoc and 15 other residents of Obando petitioned the Supreme Court on October 24, 2011 “to stop a looming environmental catastrophe” by issuing a writ of kalikasan with a prayer for a Temporary Environmental Protection Order (TEPO) and by, among others, directing respondents to cease and desist from constructing and operating the landfill project.

The writ of kalikasan, according to the Rules of Procedure for Environmental Cases, is a legal remedy that can be availed by persons or groups whose constitutional right to a balanced and healthful ecology is violated, or threatened with violation by an unlawful act or omission of a public official or employee, or private individual or entity involving environmental damage of such magnitude as to prejudice the life, health or property of inhabitants in two or more cities or provinces.

So what if, according to its proponents, it is a modern engineered landfill? It is still a garbage dumpsite located in a mangrove-protected waterway abutting the Manila Bay. Obando and its adjoining environmentally critical areas should be spared from the potential great disaster that the said landfill is expected to bring about as a result of shortcuts in legal processes resorted to by its proponents.