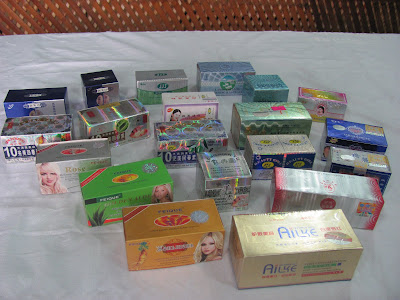 Based on the screening conducted by the group using X-Ray Fluorescence (XRF) device, all of the 20 samples tested had mercury above the 1 part per million (ppm) limit set by the Food and Drug Administration (FDA).

“Of the 20 mercury-loaded creams, 10 were among the 50 brands recalled by the FDA for exceeding the 1 ppm limit in total contempt of the law,” said Aileen Lucero, Safe Cosmetics Campaigner, EcoWaste Coalition.

The FDA has yet to ban the other 10 brands that could put users’ health at risk, the group noted.

“We call upon the FDA to immediately recall the toxic products and punish recalcitrant importers, distributors and retailers to dissuade others from defying the law,” she said.

From January 28 to February 1, the EcoWaste Coalition bought samples from Chinese drug stores and health and beauty shops in the cities of Makati, Manila and Quezon. The samples were analyzed for mercury last Wednesday with the assistance of QES (Manila), Inc.

Mercury in skin lightening products can damage the kidney and also cause skin rashes, skin discoloration and scarring, as well as a reduction in the skin’s resistance to bacterial and fungal infections, according to the World Health Organization (WHO).

Aside from mercury, traces of other toxic metals such as arsenic, cadmium and chromium were found in some of the samples.

For selling the mercury-laced cosmetics, the EcoWaste Coalition gave “Lason Awards” to the unscrupulous dealers led by Rose and Fujikura General Merchandise in Barangay Guadalupe and Barangay Sta. Cruz in Makati City where nine of the 20 samples were purchased.

According to WHO, mercury in soaps, creams and other cosmetic products is eventually discharged into wastewater. The mercury then enters the environment, where it becomes methylated and enters the food-chain as the highly toxic methylmercury in fish.

Pregnant women who consume fish containing methylmercury transfer the mercury to their fetuses, which can later result in neurodevelopmental deficits in the children, the WHO said.

While using any facial product we must first try it with safety and check whether they are suitable to our skin or not, because every person has different skin types , these product may cause Skin Rashes

This is a very interesting blog and so I like to visit your blog again and again. Keep it up.
Welcome to Green Herbz 2014 Potpourri Herbal Spice

I just want to appreciate your work. Excellent work, In other words we can say nicely executed. Keep sharing. Thank you.
Herbal Potpourri

Have they tested SNOW Aura WHITENING BOOSTER MASK? . I am concerned because of the Gold effect when you put the cream on your face.

Nice post, impressive. It’s quite different from other posts. Thanks for sharing.
herbal incense online

It was wondering if I could use this write-up on my other website, I will link it back to your website though. Great Thanks.
buy herbal incense online

It was wondering if I could use this write-up on my other website, I will link it back to your website though. Great Thanks.
k2 online

I have read and seen lots of blogs and posting but your blog is far the most interesting I have come across. Keep up!
Buy Herbal Incense USA