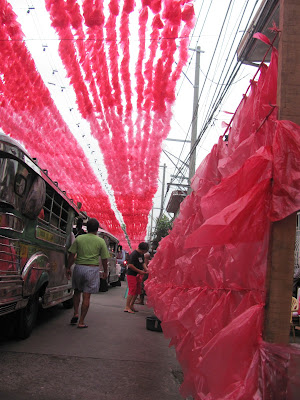 Environmental advocates today asked Manila Mayor Alfredo Lim to advise community leaders against the use of wasteful plastic banderitas (buntings) as excited residents of Pandacan and Tondo districts get ready for the upcoming feast of Santo Niño this weekend.

“The imprudent use of new thin-film plastic bags as fiesta buntings, which are surely doomed to the dumpsite after the festivities, is not acceptable amid the garbage and climate woes that the nation are trying to come to grips with,” stated Roy Alvarez, President of the EcoWaste Coalition.

“The application of these disposable bags as buntings represents a very short-lived, superficial and non-essential use of plastic bags, which, while sold cheaply, require lots of raw materials and fuels to manufacture and trade,” he continued.

“It is simply not sustainable to be spending for disposable decors that we know would add to the city’s waste problem and to environmental pollution not only in places where the buntings are hanged, but also in distant communities where these are later dumped or burned,” he emphasized.

“We therefore appeal to Mayor Lim, Vice Mayor Moreno and other city officials to intervene, support and echo our environmental appeal to their constituents for a greener fiesta,” said Alvarez.

“If Manila will initiate measures to control and eliminate wasteful fiesta habits, we are certain that the entire country will take notice and follow suit,” he added.

Residents told the group’s Basura Patroller that some 55,000 pieces of red thin-film bags were used up to decorate a portion of Narciso St. in Barangay 848, Zone 92, which has an approximate length of less than 500 meters only.

In Barangay 833, Zone 91, some 15,000 pieces were consumed in Pandacan and Talundon Sts., according to Kagawad Rez Cabunilas.

Kagawad Violeta Casidsid and Luzviminda Armobit reported that some 15,000 pieces were used in Adolfo St. and another 16,000 pieces in Laura St., both in Barangay 862, Zone 94.

As per Barangay 862 officials, the thin-film plastic bags cost P56/1,000 pieces. On top of this, they also have to spend for at least 2 rolls of plastic rope per street at P50/roll and also for “alambre” at P75/kilo.

While expressing concern over the wild use of plastic bags as buntings, the EcoWaste Coalition commended the Santo Niño de Pandacan Parish for the smart use of reusable cloth decorations that are adorning the church patio.

Long-time parish maintenance staff Boy Acosta told the Basura Patroller that the multi-color cloth-based decors have been used since 2005.

In lieu of single-use buntings made of plastic bags, packaging scraps and product advertisements, the EcoWaste Coalition suggests the use of eco-friendly substitutes that can washed, stored and reused over and over again, or not to use any buntings at all if these are not reusable.

Also, the group requested politicos to refrain from putting up “happy fiesta” banners on streets, electric posts and trees, stressing that such banners only add to street clutter and have become environmental nuisances.