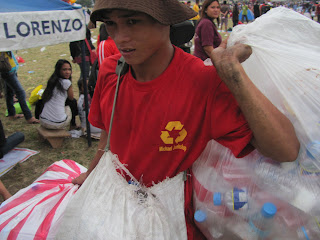 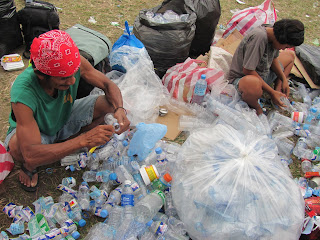 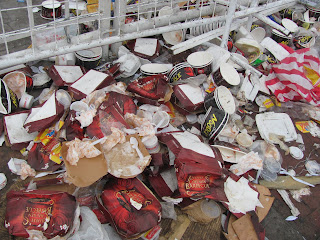 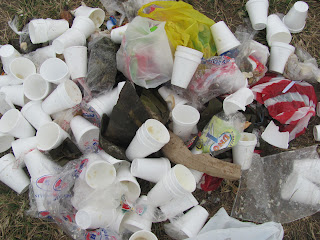 A waste and pollution watchdog today cited the waste pickers for their effort to recycle discards left by Black Nazarene devotees following the overnight vigil and Eucharistic celebration this morning at the Quirino Grandstand in Luneta.
While saddened by the widespread littering that practically turned Luneta’s open field into a dumping ground, the EcoWaste Coalition lauded some 20 waste pickers who patiently reclaimed recyclable items from the garbage that nearly blanketed the area.
“Soon after the Black Nazarene procession left the Quirino Grandstand, we saw the open field littered with mixed biodegradable and non-biodegradable materials that waste pickers foraged through to retrieve recyclables,” said Manny Calonzo of the EcoWaste Coalition’s Basura Patrol.
“We commend the waste pickers for their enterprising perseverance, which prevented valuable resources from being wasted,” he continued.
Some of the discards found scattered all over the field were food leftovers, polystyrene beverage cups and clam shell food containers, plastic bottles, plastic bags, snack wrappers, soiled carton boxes and newspapers, empty sardine cans and even used infant disposable diapers.

“Let’s get real. Our prayerful devotion to the Black Nazarene should be complemented with the highest respect for God’s creation and not by dropping litter anywhere,” commented Roy Alvarez, President of the EcoWaste Coalition, upon learning of the “trashing” of Luneta.

Among the waste pickers that the EcoWaste Coalition’s Basura Patrol spoke to was 24-year old “Kuya Liit” from Smokey Mountain in Tondo, Manila who led a team of 7 people in retrieving recyclables that would sell for over P2,000.

Another waste picker Melchor Lumanog, age 52, worked with two other people in collecting used plastic bottles with an expected total value of P300.
Mac-Mac Lopez, age 12, from the Baseco compound, was seen gathering used boxes that would sell for five pesos per kilo.
Information given by the waste pickers to the EcoWaste Coalition’s Basura Patrol shows that polyethylene (PET) bottles sell from P22-32/kilo, plastic cups, noodle containers and covers P15/kilo, plastic cutlery P15/kilo, tin cans P6/kilo and carton boxes P5/kilo.
Citing information supplied by Joe Atentar, a supervisor under the National Park Development Committee (NPDC), the EcoWaste Coalition reported that some 200-250 garbage bags would be collected from phases 1 and 2 of Rizal Park, which includes the open field.
Atentar also told the EcoWaste Coalition that some 500 garbage bags were collected in his area of jurisdiction (i.e., Rizal Park’s phases 1 and 2) during the Christmas holidays, specifically on December 24, 25, 26, 30 and 31, 2010 and on January 1, 2011.
Aside from thanking the waste pickers, the EcoWaste Coalition also expressed gratitude to the Nazarene Catholic School, Manila's Department of Public Services, the NPDC and several concerned vendors for picking up the trash and sweeping the park clean.
-end-
Email Post

Ricky Addy said…
Such a great post. Thanks for sharing this useful information with us........