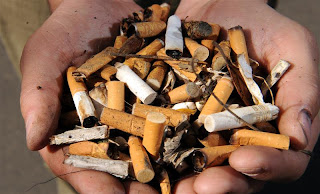 Two major citizens’ coalitions dismissed an industry-led drive against cigarette butt littering as “below the line advertising gimmick” that offers false solution to the toxic byproduct of smoking.

The Framework Convention on Tobacco Control Alliance, Philippines (FCAP) and the EcoWaste Coalition slam the move by the tobacco industry to distribute cigarette butt receptacles as a form of deceptive advertising disguised as community service or corporate social responsibility action.

“It is sheer hypocrisy on their part to tackle cigarette butt littering, but continue manufacturing tobacco products that have been causing diseases and deaths to millions of Filipinos,” said Dr. Maricar Limpin, Executive Director of FCAP, adding that "this campaign is akin to providing receptacles to used suicide implements" as she cautioned LGUs not to fall into the advertising trap.

“The provision of cigarette butt receptacles offers a very superficial and disproportionate approach to the severe health and environmental impacts of tobacco addiction. It misleadingly promotes the notion that it is perfectly alright for the people to smoke as long as they properly throw the butts," said Dr. Leah Primitiva Samaco-Paquiz, Secretary of the EcoWaste Coalition.

The PMFTC campaign will sow confusion on the government’s implementation of the World Health Organization’s Framework Convention on Tobacco Control (FCTC) that seeks to protect the people from second-hand smoke and help smokers get rid of smoking addiction, the groups insisted.

Distributing cigarette butt receptacles will confound the purpose of LGUs who have agreed to declare their cities and municipalities smoke-free, they stated.

“The government agencies and LGUs that will participate in this gimmick of the PMFTC need to be forewarned that they will be inviting violation of the Joint Memorandum Circular 2010-01 of the Department of Health and the Civil Service Commission,” Dr. Limpin emphasized.

The Joint MC 2010-01 seeks to protect the bureaucracy from tobacco industry interference, in accordance with the FCTC Article 5.3.

As defined in the said Joint MC, “tobacco industry interference refers to the broad array of tactics and strategies used by the tobacco industry to interfere with the setting and implementing of tobacco control measures.”

The Joint MC prohibits public officials and employees from soliciting or accepting, directly or indirectly, any gifts, donations and sponsorships from the tobacco industry.

Low cost-Cigarettes offers the shopping for premium cigarettes at discount prices. You will additionally notice value cigarettes at the cheap rates And delivery is extraordinarily fast and reliable.
order cigarettes

who gives a shit if it's HYPOCRISY?? If they are willing to PAY for it LET THEM. Because we can't afford to pay for it, and the cities wouldn't ante up even if they COULD afford it. Those fucking butts ARE EVERYWHERE, just every fucking where. I HATE IT... As a matter of fact I have just been outside my apartment building sweeping BUTTS out of the grass right next to the sandbox where the children all play.