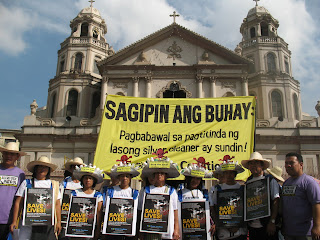 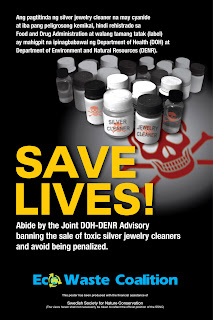 The EcoWaste Coalition, a toxic watchdog, went store-hopping this morning near the iconic Quiapo Church to urge vendors to desist from selling prohibited silver jewelry cleaners containing cyanide and other harmful substances.

The group’s AlerToxic Patrol called on silver jewelry shops along Carriedo St. to ask them to abide by a recent government directive banning the sale of cyanide-laced silver cleaning agents as well as those that are not properly registered and labeled.

The AlerToxic Patrol volunteers provided shop owners and attendants with copies of the Joint DOH-DENR Advisory signed by Secretaries Enrique Ona and Ramon Paje and gave them copies of the EcoWaste Coalition’s “Save Lives” posters.

“We have come here today to ensure that silver cleaner dealers are duly informed about the ban and the punitive action awaiting them if they chose to ignore it,” said Thony Dizon, Coordinator of the EcoWaste Coalition’s Project PROTECT (People Responding and Organizing against Toxic Chemical Threats).

“With the cooperation of the vendors, we can put an end to cyanide poisoning by tightening the supply chain and eliminating toxic silver cleaners altogether,” he said.

“Let us purge the market of toxic silver cleaners for the safety our consumers,” Dizon pleaded.

Such a move, the EcoWaste Coalition said, will advance the goal of the Strategic Approach to International Chemicals Management (SAICM), a global policy and strategy adopted in 2006 by governments, including the Philippines, to protect human health and the ecosystems from the harms caused by exposure to toxic chemical substances.

The Joint DOH-DENR Advisory branded silver cleaners as “threat to health and safety.”

“All commercial establishments such as jewelry shops and other retail outlets and ambulant vendors are strongly warned against selling and/or dispensing unregistered and unlabeled silver cleaners,” the Joint Advisory said.

The Joint Advisory also enjoined the public to call the Food and Drug Administration at telephone number 8078275 for any information that may lead to the arrest of importers, manufacturers, distributors and sellers of banned silver cleaners.

Since the improper disposal of cyanide-laced silver cleaners can endanger aquatic life, the DOH and the DENR advised individuals and entities to surrender unregistered and unlabeled silver cleaning agents in their possession to the nearest office of the DENR-EMB or the DOH-FDA or their corresponding regional offices.

Citing information given by the UP National Poison Management and Control Center (UPNPMCC), the EcoWaste Coalition said that 11 Filipinos (three from adult age group and eight from pediatric age group) died in 2009 out of the 235 cases of silver cleaner poisoning handled or referred to the Center.

UPNPMCC data also showed that 11 more people (6 adults and 5 children) have died from January to September 2010 due to silver cleaner poisoning.

The PGH-based Center also reported a dramatic increase in the non-accidental intake of silver cleaners, which rose from 7% in 2005 to 86% in 2009.

From July to September 2010, 57 of the 68 in-patient admissions and telephone referrals managed by the UPNPMCC were due to non-accidental ingestion of silver cleaners, or 84% of the cases handled.