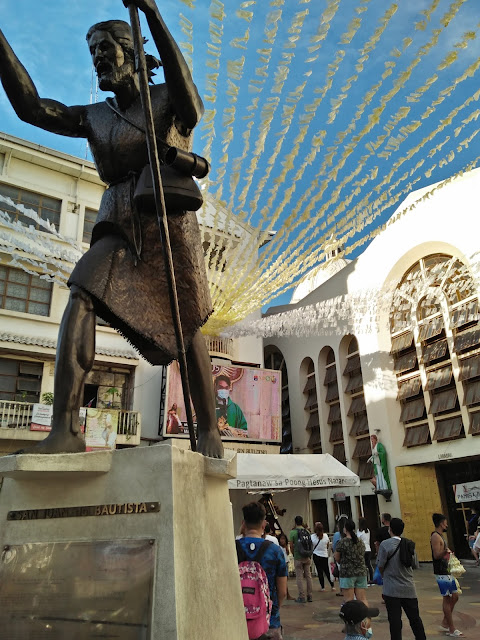 The environmental health group EcoWaste Coalition has called out the Quiapo Church for decorating the plaza where the bronze statue of San Juan Bautista stands with single-use plastic banderitas.
The group was unhappy to see the plaza at the Carriedo side of the popular church festoon with plastic “labo” buntings ahead of the feast day of St. John the Baptist on June 24.
Plastic “labo,” a small and super thin plastic commonly used as packaging for food, is among the most ubiquitous plastic garbage found on land and in the rivers and oceans, the EcoWaste Coalition said.
The watchdog group has been monitoring wasteful plastic banderitas in community festivities as part of its advocacy for a zero waste and toxics-free society, noting the need for concerted action to stop plastic pollution from all sources.

“The use of throw-away fiesta buntings is not in tune with the call for ecological conversion made by the Catholic bishops in the midst of climate emergency facing our nation and planet Earth,” lamented Jove Benosa, Zero Waste Campaigner, EcoWaste Coalition.
The group called to mind the pastoral statement released in 2019 by the Catholic Bishops’ Conference of the Philippines (CBCP) appealing for “continuing ecological conversion” and for “ecological actions,” including “eliminating single-use plastics,” to help address the “ecological crisis.”
“We urge our churches to design single-use plastic out of our faith-inspired celebrations,” said Benosa. “It’s time to say good riddance to disposable plastic buntings that only turn into residual garbage, which  is dumped or burned somewhere or gets spilled into the oceans.”

“As wasteful plastic banderitas play no role in the successful conduct of any religious activity, we appeal to our community and church leaders to junk the outmoded practice of hanging fiesta buntings in the streets and plazas,” the EcoWaste Coalition said.
“The true essence of our faith-stirred celebrations is not measured by the length and color of plastic buntings crisscrossing our streets, but on how we care for one another and for our Mother Earth, especially in times of difficulties such as during the COVID-19 pandemic,” it added.
The group is hopeful that more dioceses and parishes in the country will roll out policies and campaigns to reduce plastic consumption and disposal, especially of single-use plastics.
Reference:
http://cbcpnews.net/cbcpnews/an-urgent-call-for-ecological-conversion-hope-in-the-face-of-climate-emergency/
Email Post