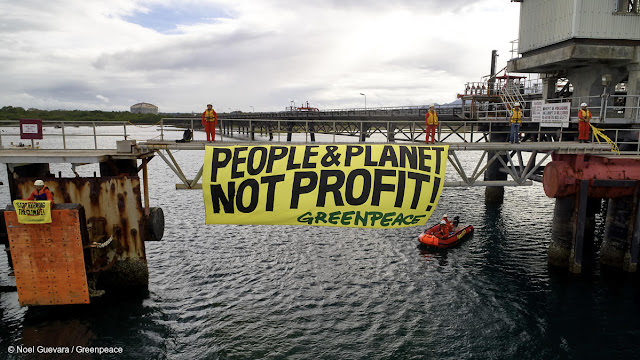 Environmental and human rights groups mark this year’s Earth Day by calling on the Philippine government to prioritize the systemic changes needed to protect Filipinos from harms aggravated by the climate crisis.

The groups, who are also the petitioners to the world’s first climate change and human rights inquiry [1], are also urging the Commission on Human Rights (CHR) to expedite the issuance of the resolution to the said case. The Inquiry, which took place from 2015 to 2018, looks into the responsibility of fossil fuel and cement companies for human rights harms arising from business practices that aggravate climate change.

The groups believe the resolution can aid the crafting of a clear people-centered recovery plan as the COVID19 pandemic has magnified issues that have long been driven by climate change, such as food insecurity, health risks, and lack of access to basic needs.

“The pandemic has shown us how much crises are making already challenging situations even worse for our communities already suffering food insecurity, dwindling livelihoods, and other impacts of the climate emergency. An immediate and strong resolution from the CHR on the climate and human rights petition would provide a strong rallying point to protect humanity from further climate-destructive activities by entities that put profit over people and the planet. This will be the Filipino people’s legacy to the rest of the world,” Greenpeace Southeast Asia Executive Director Naderev “Yeb” Sano said.

The petitioners hope that the CHR will soon issue a resolution that could support the call for climate justice by holding the biggest polluters accountable.

“Just recently, a Category 5 super typhoon hit communities in Eastern Samar and Bicol leaving 18,000 families evacuated and affected. Our case against carbon majors is simply to protect people and prevent climate catastrophe. We have only nine years left to take action,” Erwin Puhawan of the Philippine Movement for Climate Justice said.

“We want the CHR to release the resolution because it will give us some relief from the impacts of the climate crisis. It is high time we show the world that communities and people are rising up from the big polluters that are responsible for the climate emergency we face,” Beckie Malay of the Philippine Rural Reconstruction Movement said.

“As guardians of human rights, we expect CHR to ensure our people’s access to mechanisms and remedies leading to climate and environmental justice, which is key to restoring our earth from further degradation.  The time has come for corporate polluters to face the music and accept responsibility for the dire consequences of their fossil fuel investments on planetary health and human rights,” said Aileen Lucero, national coordinator for EcoWaste Coalition.

The imminent findings of the CHR are expected to provide an unprecedented basis for future climate justice litigation and ensuing policymaking needed to help keep global temperatures below 1.5-degree celsius  [2].
[1] ExxonMobil, Shell, Total, BP and Chevron are among the 47 respondents of the world’s first-ever climate change and human rights petition. The petition, which was filed before the Commission on Human Rights, now awaits its final resolution. Read more.
[2] IPCC’s Special Report on 1.5 degrees Celsius shows that global CO2 emissions must be halved by 2030 before falling to net-zero by mid-century at the latest. Read more.
Email Post