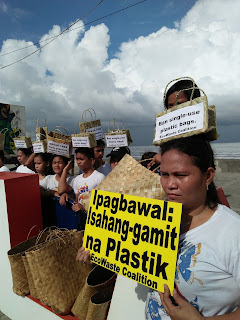 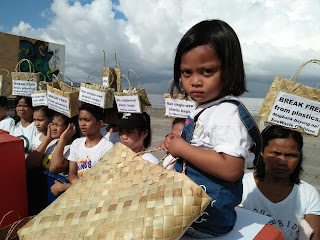 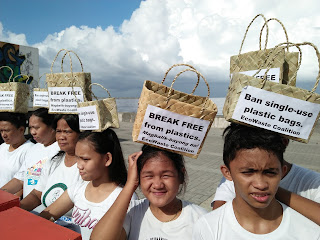 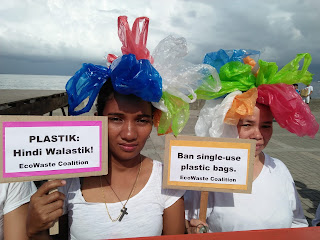 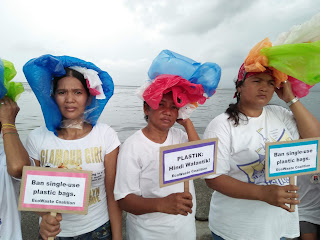 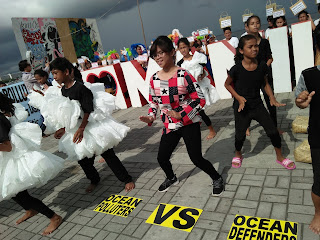 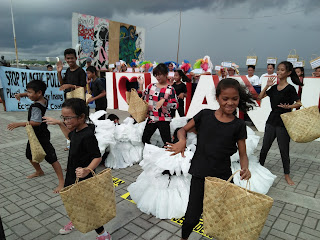 Environmental advocates staged a “Bboom Bboom” dance showdown at the promenade by the famed but badly polluted Manila Bay to call attention to the global plastic crisis and press for a national ban on single-use plastics.

The EcoWaste Coalition, a non-profit association for a zero waste and toxics-free Philippines, organized the dance face-off together with allies from the #breakfreefromplastic movement to mark the International Plastic Bags Free Day on July 3, a special day to raise awareness about the adverse environmental impacts of single-use plastics, and promote sustainable alternatives. The activity also forms part of a series of events worldwide to celebrate plastic-free July, a month of global activity demonstrating solidarity around living our lives without single-use plastic.

The gang of “Ocean Polluters” donning plastic trash faced off with the league of “Ocean Defenders” who were seen brandishing handwoven native “bayong” bags and reusable cloth bags.  The youth performers are members of Green Stage Filipinas-Maskara, an affiliate group of the EcoWaste Coalition from Cavite.


“This fun event has a very serious message for everyone: it’s time to ban single-use plastics from shopping bags to drinking straws to halt the destructive plastic incursion of the oceans that has already reached crisis proportions. The marine ecosystems are choking to death because of the plastic wastes and the cocktail of chemicals that are increasingly dumped into water bodies,” said Aileen Lucero, National Coordinator, EcoWaste Coalition.

“Our lawmakers must heed the signs of the times such as the plastic clogged esteros and the eight million tonnes of plastic spilled into the seas every year and take strong action against the unnecessary applications of plastics,” she said.


Von Hernandez, Global Coordinator of the Break Free from Plastic Movement, noted: “The number of governments and institutions worldwide taking aggressive action to stop the use of single-use plastics continues to grow by the day. This is one area where the Philippines can demonstrate leadership by also banning and phasing-out the use of disposable  plastic items like bags,  cups, straws,  styrofoam food containers, and cutlery nationwide.”

“The fact that these single-use plastics keep ending up in our oceans, coastal areas and dumpsites prove they are problematic, unrecyclable, and almost impossible to manage. Besides, binging on the use of plastic items that one uses for only a matter of minutes and yet will outlive us by hundreds of years is just plain absurd and irresponsible," he pointed out.

“As we grapple with the magnitude of the plastic pollution problem we are facing right now, our government should work double time to solve this crisis.   We are counting on Senators Loren Legarda and Juan Miguel Zubiri and other legislators from both the House of Representatives and the Senate to join forces and get a national legislation banning single-use plastics enacted by the current Congress,” said Angelica Carballo Pago, Media Campaigner, Greenpeace Southeast Asia - Philippines.

Legarda and Zubiri last month publicly declared their support for a legislation that will prohibit single-use plastics.

Having signed up to the UN Environment’s #CleanSeas campaign against marine litter, the government should waste no time and make the banning of single-use plastics a national priority to protect fish, a staple food for Filipinos, as well as fish-based livelihoods, which plays a key role in the country’s food security, the groups said.

As the desired law is being prepared, the groups appealed to the industries to reduce plastic packaging, design toxic chemicals and wastes out of processes and products, and take responsibility for their products at the end of their lifecycle, including their retrieval and recycling.

The groups further reiterated the need for consumers to stop the superfluous uses of plastics and aim for plastic waste prevention and reduction instead of the typical buy-use-throw habit.

According to some studies, if plastic waste spillage from land sources is not discontinued, by 2050 oceans will have more plastic than fish.

Break Free From Plastic is a global movement envisioning a future free from plastic pollution. Since its launch in September 2016, over 1,200 groups from across the world have joined the movement to demand massive reductions in single-use plastics and to push for lasting solutions to the plastic pollution crisis. These organizations share the common values of environmental protection and social justice, which guide their work at the community level and represent a global, unified vision. www.breakfreefromplastic.org.

EcoWaste Coalition is a non-government and non-profit network of community, church, school, environmental and health groups engaged in the promotion and protection of public health and the environment toward the envisioned zero waste and toxics-free society.
Posted by EcoWaste Coalition at Monday, July 02, 2018